Capsule Summary: The daily visit to the 4077th by a North Korean plane provides much needed relief for most of the camp but frustration for Frank and Margaret.

This is a wonderful episode from start to finish. It’s absurd and hilarious and fires on all cylinders. The plot, the jokes, the PA announcements, everything works. It’s early M*A*S*H at its very best. What I enjoyed most about rewatching it for this review was the fact that so many scenes seemed brand new to me. Either I had forgotten about them or, more likely, they were cut from the episode in syndication and this was the first time I was watching it uncut on DVD.

Specifically, the end of the lengthy scene in Colonel Blake’s office when Frank finds a stapler in his holster seemed new to me. Actually, much of that scene felt new, including the exchange between Colonel Blake and Frank about Gary Cooper movies. Also, the scene in the nurses’ shower when Hawkeye and Trapper share a Martini via IV and discuss how to keep Frank from firing the gun.

There’s really just the one storyline involving 5 O’Clock Charlie which turns into Hawkeye and Trapper’s crusade to stop Frank from and later stopping him from using the anti-aircraft gun. It’s all so good that I don’t know where to start. Colonel Blake and his nug, perhaps? Hawkeye and Trapper continuously replacing Frank’s gun with random everyday items (the plunger is my favorite)? Frank running drills with his troops? Trapper dressed up as General MacArthur running drills with his troopers?

The the tag in this episode is quite nice, with its seemingly sincere attempt on the part of Hawkeye and Trapper to bond with Frank by inviting him to dinner. About the only aspect of the episode that doesn’t quite fit is the inclusion of the guitar playing dentist Captain Phil Cardozo, played by Corey Fisher (who had a small role in the movie MASH). It doesn’t add much of anything to the episode.

5 O’Clock Charlie would return in the Season Three episode “There Is Nothing Like A Nurse,” providing a rare bit of episodic continuity. Wikipedia has a lengthy paragraph on the production of the episode, referencing an October 1972 issue of Private Pilot magazine. All of the footage was filmed in one day. A pilot named Don Burkett flew the Ryan PT-22, which he also owned, while sitting in the rear seat of the plane. Apparently if you look closely you can see Burkett in the rear seat, although I haven’t been able to spot an actual person.

Also according to Wikipedia, this episode is based on the Japanese airplanes that harassed Army Air Force bases at night during World War II’s Guadalcanal campaign. A similar plane was featured in a March 1963 episode of McHale’s Navy. I doubt very much the Army would have allowed a North Korean airplane to bomb one of its MASH units for six weeks, even if the pilot was incompetent, but this is such a great episode that I’m willing to give it a little suspension of disbelief. 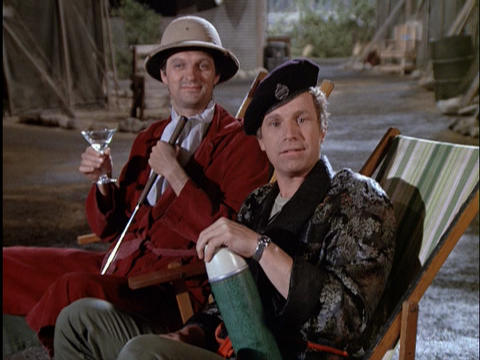 Does “5 O’Clock Charlie” hold the record for the most lines spoken by Ginger in a single episode? There’s the scene in the O.R. with Colonel Blake and then another line later on in Post-Op when she’s helping trick Frank into thinking it isn’t time for 5 O’Clock Charlie to appear.

Three actresses are listed in the closing credits playing nurses: Sarah Fankboner as Nurse Klein, Gail Bowman as Nurse Powell and Deborah Newman as Nurse Richards. Nurse Klein protested when Hawkeye and Trapper took four dozen sheets and I believe Nurse Powell is the woman in the towel who walks in on Hawkeye and Trapper in the showers. So that would mean Nurse Richards must be the nurse Hawkeye flirts with at the first viewing of 5 O’Clock Charlie’s bombing.

Actor and writer Keith Walker, who provided the story for this episode and co-wrote the teleplay, has only three other scriptwriting credits to his name. In 1993 he co-wrote the screenplay for Free Willy.

Klinger doesn’t appear in this episode.