Capsule Summary: B.J. is depressed because his wedding anniversary is right around the corner; Klinger is charged with finding a harmonica for a wounded South Korean boy; Charles learns to defend himself after being punched by a drunk soldier.

There are parts of this episode that I like. In fact, each of the storylines could work but when taken together there’s just something off. Like so many episodes of the series, the storylines are at odds with one another: B.J.’s storyline is deeply emotional while Charles and his karate is somewhat bizarre and over-the-top. Throw in the minor harmonica storyline, which is really just a subplot, and you’ve got an episode that doesn’t fit together all that well.

Hawkeye certainly went to great lengths to cheer up B.J. It must have been a tremendous amount of work to coordinate with Peg to prepare the film for B.J. The episode took place over the course of at least a week, based on Klinger’s comment about Charles and his “snazzy new pajamas.” Yet B.J. told Key Yong Lu that Soon Chi’s would only need to stay at the 4077th a couple of days. So are we to believe that Hawkeye recorded B.J.’s thoughts, shipped the tape to Peg, the film was made and shipped back to Korea in a week Just shipping the tape and film to and from the States probably took a few weeks each way.

Charles recording a farewell tape for his family was amusing. I’m particularly fond of his message to Honoria about the butterfly collection. I wonder what Cousin Alfred did to get on his bad side. The ending rhyme seems a little beneath Charles, though. Anxious as he may have been, I’m sure he could have come up with a better way to end the message.

I hope David Ogden Stiers at least had some fun with the outrageous karate moves in this episode because they are painful to watch. His conversation with Hawkeye after being punched by Finch is yet another in a long line of very nice Charles moments, perfectly acted by Stiers and offering a brief glimpse at the depth of the character. There must have been a better way to explore his feelings of physical inadequacy. 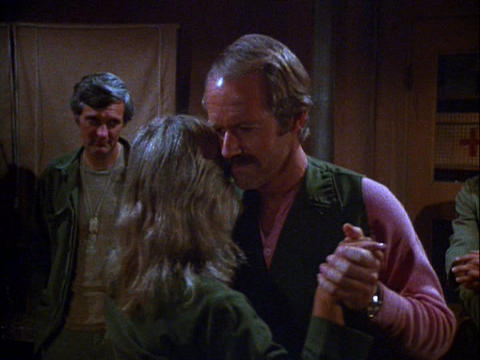 Margaret stands in for Peg

Why is Colonel Potter the one kicking the truck door to get it open in the tag? It should have been Charles demonstrating more of his skill at karate.

Some might think Hawkeye’s impersonation of Charles was a bit much but personally I find “an harmonica” hilarious. Maybe it’s just me.

Catherine Bergstrom makes her second and final appearance as Peg in this episode. The first was in “Dreams” in Season 8.

20 Replies to “Episode Spotlight: Oh, How We Danced”