Capsule Summary: Radar types out the 4077th’s weekly activity report and personnel record, which includes a wounded Chinese prisoner, Klinger being examined by a psychiatrist, and Hawkeye falling in love.

This is a notable episode for two very different reasons. First, it marked the first guest appearance by the late Allan Arbus as an army psychiatrist, in this episode named Milton Freedman. Starting with his second appearance later in Season Two the character’s first name was changed to Sidney. Arbus would make 12 appearances on M*A*S*H, the last of which was in the series finale.

(Just last month, M*A*S*H script collector Eric got his hands on a production script for “Radar’s Report” and discovered that the character was actually originally named Robert. In the copy of the script he has, the name Robert had been crossed out in pencil and Milton written in. Read more at the MASH4077TV.com Forums.)

Second, this episode featured one of the darkest moments on M*A*S*H, when Trapper — enraged a the death of his patient — stormed into the wounded prisoner’s tent and stood there ominously until Hawkeye calmed him down. In that moment, Trapper appeared truly conflicted and genuinely a little sinister. 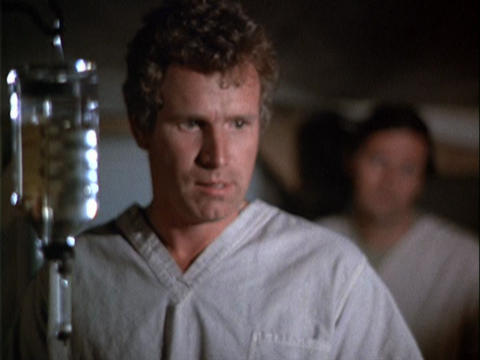 Contrast Trapper’s reaction with Hawkeye’s earlier in the episode, when he didn’t seem to understand why Trapper was so upset and even defended the prisoner by arguing he was terrified out of his skull. Recall that it was Trapper who warned Hawkeye to be careful with the prisoner, suggesting that “the way they’re brainwashed, he thinks we’re gonna carve him up and eat him.”

One could argue that this was an example of Hawkeye being a bleeding heart. I would suggest it was the an attempt present both sides of an emotionally charged plot. The prisoner wasn’t actually acting maliciously and certainly didn’t actually attack or wound Trapper’s patient or otherwise intentionally harm him. At the same time, Trapper lost a patient due to the prisoner’s actions who otherwise would have lived.

I do think the music that began playing when Margaret came in the scrub room to tell Trapper the patient had died was a little much, a little too dramatic. It was actually distracting.

There was more to the episode than Trapper’s storyline. Klinger’s evaluation by Major Freedman was amusing if not unexpected, since actually being found insane would have meant the end of the character. Klinger obviously wasn’t too concerned about the evaluation because he didn’t let it stop him from wearing women’s clothing and bucking for a Section 8.

Hawkeye’s storyline was bizarre. He met Lt. Johnson for the first time during surgery and hours later decided he wanted to marry her? The point, of course, was to switch things up and have Hawkeye on the receiving end of someone who doesn’t want a serious relationship. The story line works but I still think it is odd.

The central conceit of the episode, that Radar is writing a weekly report and including various events that happened at the 4077th during a single week, falls apart when you stop to consider that he wasn’t present for a lot of what happened.

The P.A. announcement about the generator heard when Hawkeye and Erika are in her tent wasn’t part of the script. According to Larry Gelbart in a May 1999 post to the alt.tv.mash Newsgroup, it had to be added during post-production because there was a problem processing the film for that scene.