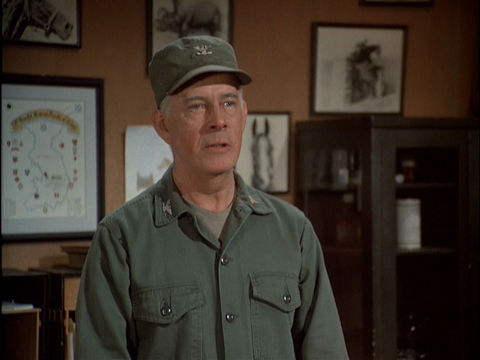 Capsule Summary: When Colonel Potter learns that someone from the 4077th has been making complaints to headquarters about the way the unit is run, he decides to leave Korea and take a stateside posting.

This episode really only has one story line, one that involves a few plot threads. There’s the primary thread of Colonel Potter learning about the complaints coming from inside his command, the reaction from Hawkeye, B.J. and the others, their search for the culprit and of course there’s the Kentucky Derby party (and Margaret’s hatred for white icing on the cake).

Harry Morgan had such a wonderful way of acting angry. In this episode he’s seen yelling at Klinger, Radar, Charles and acting tough with just about everyone else. Poor Radar gets yelled at twice, in fact, and Margaret gets called a snitch.

For me, the highlight of the episode is Hawkeye and B.J.’s search through Charles’s trunk for proof he’s the spy. The letter, with its wonderful line about sparkling stars, is hilarious, as is Charles explaining that Winchesters do not spy but do occasionally hire them and his obvious pain at using the word jerk. He certainly shows them up, though, by explaining how they can actually find the letter.

A wish for peace

The revelation that Corporal (Lieutenant) Joe Benson was spying for the inspector general due to a complaint from Colonel Frank Webster falls pretty flat. Benson told the inspector general that from a military standpoint things at the 4077th were pretty loose and that was enough to spark the whole thing? Of course, the episode isn’t really about finding the snitch but how the 4077th reacted to Potter’s announcement that he was leaving.

Hawkeye begging Colonel Potter to stay in Korea (“You can give me a hundred good reasons to go, and I can’t give one good reason to stay. Stay anyway.”) is touching.

Radar opening a sealed letter with absolutely no trouble feels like something Season One Radar would be able to do.

There are two goofs in this episode, one in which Alan Alda nearly falls off “Whirlaway” while the camp is singing “My Old Kentucky Home” and another involving the placement of the scarf B.J. is wearing. Read more about them here and here.

At the very end of the episode, right after Colonel Potter blows out the candles on the half derby cake, there’s a noticeable change in the color of the footage. Take a look: 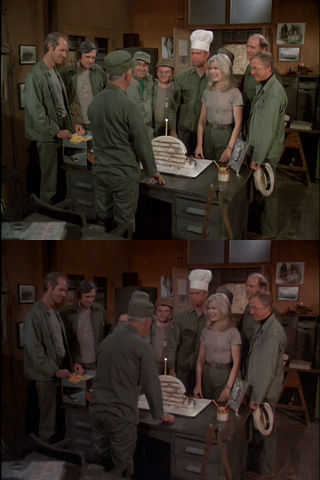