The Seventh Annual TV Land Awards (taped Sunday, February 19th) were shown on TV Land last night, which is a cable channel I don’t get. Thankfully, TV Land has put highlights from the show on its website, including a 13-minute segment showcasing the presentation and acceptance of the Impact Award.

Martin Sheen introduced the award and the cast and crew who were on hand to accept it. A montage of clips from the series was shown, interspersed with comments from Bob Newhart, Kate Flannery, Phil Rosenthal and others as well as Harry Morgan and Jamie Farr. Sheen then welcomed everyone to the stage and the audience took to its feet and applauded.

Alan Alda made the following speech:

“I have to tell you this is really a surprise to me. I bet we all had this reaction. I got a little emotional watching that as I remembered each of those shots when we shot them.

“You know, people ask us why the show was so successful. And it was in great part because of the talents of the writers and producers — the great Larry Gelbart, Gene Reynolds and Burt Metcalfe — the great the directors, a string of great directors, and the actors and not only their talents but this thing we had among us. We loved one another. And that affection we had I think came through the lense of the camera. The thing is that what I don’t think is noticed much is that what was underlying all of it was that we were playing out the lives of people who had really lived through these harrowing experiences. The people who had gone through this both in the MASH units and on the front lines in Korea. And no matter how silly the show got in the comedic moments we never forgot that real people and lived through these things.

“And I have to tell you Tom [Selleck] is right. When I think of them, when I remember them, I think of the people now who are living through a war. And I think we have to support them even as they come home. And there are organizations that help ease the transition back into civilian life. And just in the spirit of M*A*S*H it wouldn’t be a bad idea to search them out and support those organizations. For eleven years we healed imaginary wounds and that’s a chance to heal some real wounds.”

Burt Metcalfe took a moment to note that Gene Reynolds couldn’t be at the taping because he was ill and accepted the award on his behalf. Loretta Swit recounted that a young teenager recognized her at the airport and said “Golly, my grandfather is going to be so thrilled.” She then thanked TV Land only to be interrupted by Alan Alda, who gave her a big kiss. 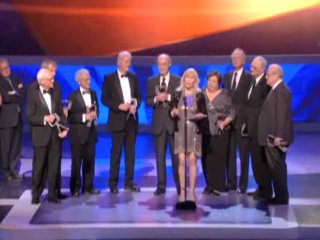 Larry Gelbart extended Gary Burghoff’s thanks (he was in Florida) and made the following request:

“One of the reasons the show has its continued success is because the costumes, unfortunately, never go out of style. Rather than make them so familiar perhaps it would be a good thing for the people who run this world to sit down and make the show obsolete.”

Wayne Rogers gave Larry Gelbart credit for the success of the show and joked that if he had a mustache he’d be a bigger star today. 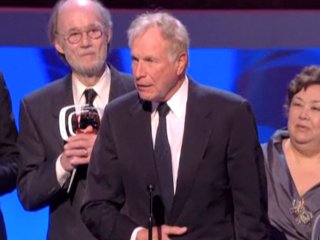