It’s something that has puzzled M*A*S*H fans for decades. Who is that brunette nurse running towards the chopper pad in the opening credits? I thought I had discovered the identity of this brunette actress last year when a fan of the series e-mailed me suggesting it was Michele Lee. But a pair of articles in The Los Angeles Times from 1978 point in another direction.

In the May 26th, 1978 edition of the “TV Talkback” section of The Los Angeles Times, the following question and answer appeared:

Q. On the opening sequence of MASH there is a brunette nurse out front and running fast toward the chopper pad. Can you tell us who she is? My husband is quite taken with her.
F.R., San Diego

A. Will you believe this? Even 20th Century-Fox, where the series is filmed, doesn’t know. That opening sequence was filmed seven years ago when the series began. The studio had an “extra call,” with the union supplying several extras for nonspeaking roles in backgrounds scenes. Several girls were picked for that opening scene and instructed to run toward the cameras. After they were paid, that’s all they did that day. So if that brunette is out there in the Hollywoods somewhere, please identify yourself so that F.R.’s hubby will be happy.

About a month later, in the April 16th, 1978 edition of “TV Talkback,” the following exchange was printed:

Q. I was delighted that someone out there wondered who I was? (TV Talkback, March 26). Yes, I’m the brunette on the opening title shot of “MASH” seen running towards the camera. It was seven years ago that I ran out of that tent toward the helicopter pad at 20th Century-Fox ranch. The producer was Gene Reynolds. He lined up about 20 girls and we literally raced for the job. I had run in high school, so I was more than eager to compete. I’ve since acted in various series, “Kojak,” “Starsky & Hutch” and others. Thanks again, and thanks to F.R., of San Diego, for asking.

A. Another mystery solved.

Here’s a head shot of Ms. Fradella from the April 16th, 1978 edition The Los Angeles Times: 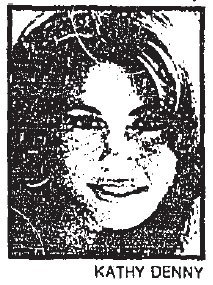 Be sure to check out my feature Nurses of the 4077th: The “Running Nurses” from the Opening Credits for information on two of the other actresses in the opening credits.

20 Replies to “Identity of Brunette in Opening Credits Revealed”