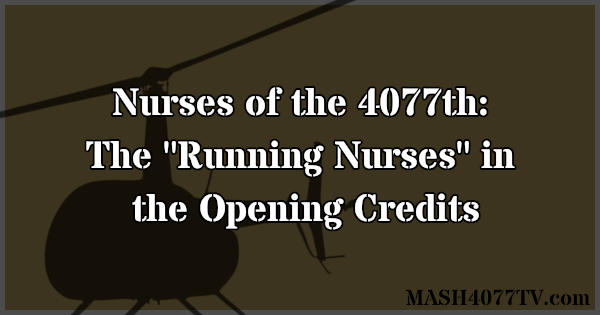 There is a brief scene in the opening credits to M*A*S*H in which a group of five nurses are shown running towards the chopper pad. The identity of these “running nurses” has been a mystery for decades, one that has intrigued and confounded fans of the series. Although they’re in just about every episode, very little is known about these actresses. A handful of episodes during Season Eleven did not include this scene; the opening credits were trimmed down to make room for more commercials and the “running nurses” got the boot.

During the first minutes of the Season One episode “Sticky Wicket” (originally broadcast March 4th, 1973) the camp is seen responding to Radar’s warning that incoming wounded are on their way. Footage that appears to have been shot at the same time as the opening credits is shown, including a few seconds with the “running nurses” bursting out of the nurses quarters. This footage mirrors the scene in the extended opening. Here’s an animated GIF that combines the scene from “Sticky Wicket” with the better known footage from the opening credits:

Footage from “Sticky Wicket” and the opening credits

Notice how well the two scenes fit together. Four of the nurses are shown wearing their hats in “Sticky Wicket” as they exit the nurses quarters; in the footage from the opening credits, only the two nurses in the back are wearing hats while those in the middle are holding theirs. It’s likely that a lot of extra footage was filmed when the opening credits were being put together. Perhaps “Sticky Wicket” ran short and some of this footage was included to pad out the episode.

According to several messages at the alt.tv.mash newsgroup from M*A*S*H creator Larry Gelbart (see this message and this message, both from 1998, via Google Groups), one of the “running nurses” is Gwen Adair, who went by Gwen Farrell during her time on M*A*S*H. 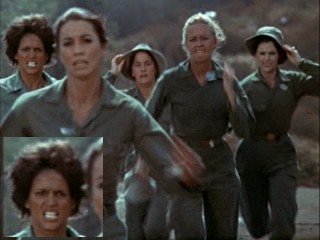 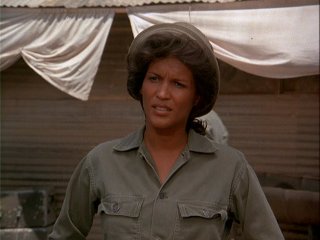 She is on the far left in the “running nurses” scene and later appeared in dozens of episodes over the course of the series, although she was only credited in nine (see the Same Face, Different Name section for more). Gelbart also stated that four of the five actresses (including Gwen) were in other episodes.

The actress in the middle, who is obscured by Sheila Lauritson at times, appears to be Marcia Gelman, who was credited in the episodes “The Sniper” and “The Incubator” during Season Two. 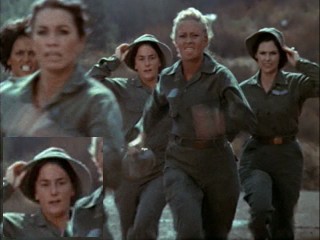 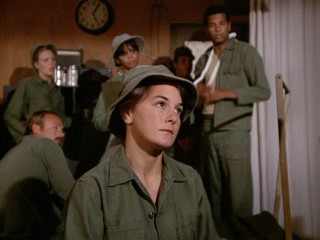 More than anything else, the identity of the brunette at the front of the “running nurses” scene has baffled fans of M*A*S*H for years. In January 2009 I stumbled upon the following question and answer in the “TV Talkback” section of the May 26th, 1978 edition of The Los Angeles Times [1]. Someone wrote in with the following question:

On the opening sequence of MASH there is a brunette nurse out front and running fast toward the chopper pad. Can you tell us who she is? My husband is quite taken with her.
F.R., San Diego

Will you believe this? Even 20th Century-Fox, where the series is filmed, doesn’t know. That opening sequence was filmed seven years ago when the series began. The studio had an “extra call,” with the union supplying several extras for nonspeaking roles in backgrounds scenes. Several girls were picked for that opening scene and instructed to run toward the cameras. After they were paid, that’s all they did that day. So if that brunette is out there in the Hollywoods somewhere, please identify yourself so that F.R.’s hubby will be happy.

Thankfully, about a month later in the April 16th, 1978 edition of the paper, the brunette in question did write in to identify herself [2]. Here’s what she had to say:

I was delighted that someone out there wondered who I was? (TV Talkback, March 26). Yes, I’m the brunette on the opening title shot of “MASH” seen running towards the camera. It was seven years ago that I ran out of that tent toward the helicopter pad at 20th Century-Fox ranch. The producer was Gene Reynolds. He lined up about 20 girls and we literally raced for the job. I had run in high school, so I was more than eager to compete. I’ve since acted in various series, “Kojak,” “Starsky & Hutch” and others. Thanks again, and thanks to F.R., of San Diego, for asking.
Kathy Denny Fradella,
Van Nuys.

During the closing credits to the installment of E! TV Tales focusing on M*A*S*H (originally aired April 21st, 2002) Gene Reynolds explained that while working on the opening credits, each time the sequence with the “running nurses” was filmed, the brunette would invariably wind up in front. Now we know why: they were running for the right to be in the opening credits and Kathy Denny Fradella was a fast runner. 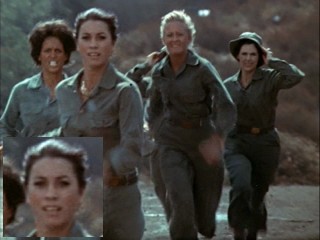 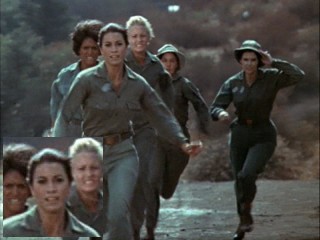 In February 2008 Mary sent me an e-mail that suggested actress Michele Lee — famous for her role on the prime time soap Knot’s Landing — might be the brunette in the opening credits to M*A*S*H. Mary heard Ms. Lee say in a television interview years ago that she was the nurse at the front during the opening credits and that she is paid a small amount of royalties for her the use of her image. This contradicts the information from The Los Angeles Times.

Furthermore, on September 8th, 2009 I received an e-mail from none other than Kathy Fradella herself confirming that she was indeed the brunette at the front of the “running nurses.” Here’s what she had to say:

Hello my name is Kathy Fradella (Baker) I am the brunette nurse that runs in the front during the opening credits of mash. I stumbled across your website and thought I would comment, just in case you still thought it was Michele Lee. I worked on the show as an extra the first season. I went on to do stunt work and small bit parts as an actress. I am still living in Southern California. Since Mash I have married and had two children (grown up now).

I am no longer working in the film industry.

I hope this solves the puzzle.

Kathy was also kind enough to send me two pictures of herself with permission to post them: 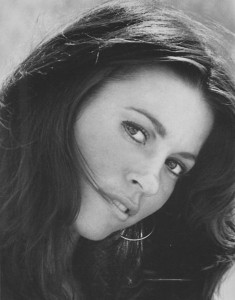 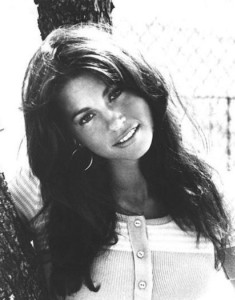 I asked if she had any memories of her time spent on M*A*S*H and she recounted the following:

One memory I do have is how awfully hot it was shooting at the Malibu ranch. It must have been 105 degrees out there in the summer time. With all the army gear on,hats,boots and all we would be miserable. So we would have water fights when we were waiting for the crew to line up the next shot.

Water fights with the likes of Alan Alda and Loretta Swit? Sounds like a fun time.

In November 2009, Josh posted in the comments that the blonde nurse running up front is none other than Sheila Lauritsen (you can read more about her in the Same Face, Different Name section). I had wondered if Lauritsen was the blonde in the opening credits but wasn’t certain. Thanks to Josh, now we know for sure. And he should know. Sheila Lauritsen is his mother. 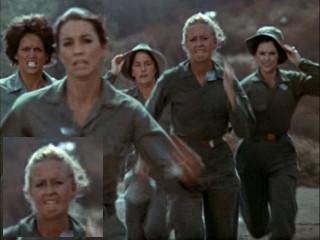 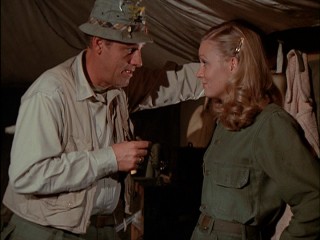 The nurse on the right in the background with dark hair and a hat was a background extra named Lori Noel Brokamp (known during her time working on M*A*S*H as Lori Noel). She had this to say about her experience in August 2013:

The piece of film in the credits was shot before the first program aired. The director picked several of us to run up the hill towards the fictional helicopter. I ran as hard as I could and was still nearly last. We had to shot [sic] this scene five or six times. None of us received residuals, who knew it would still be aired after all these years.

The MASH show brought in a surgeon as technical adviser that trained us to handle surgical instruments. For some reason, I was really skilled at doing that and I passed instruments to all the television doctors; Marcus Welby, Bold Ones, Emergency, and Medical Center. Thank you MASH!

Years later, I ran into Gary Burgoff in Seattle, Washington at an art show and talked with him about the MASH Show and about his artwork (since I am an artist myself); and never knew he painted. He paints birds.

(Note: This nurse was originally identified as Sandra Hull.) 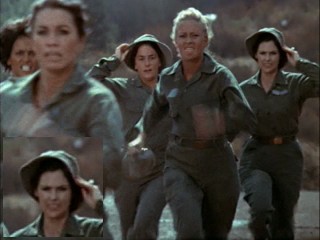 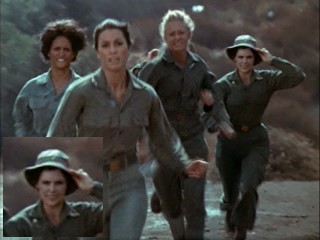 Lori Noel in the Opening Credits

During the uncut and extended opening credits to the first episode of M*A*S*H (“M*A*S*H – The Pilot,” originally broadcast September 17th, 1972) Lt. Dish, played by Karen Philip, is seen leading a large group of nurses — including Leslie Scorch, played by Linda Meiklejohn — out of the nurses quarters. There appear to be at least eight nurses running out of the nurses quarters, if not more. This scene, and the extended opening sequence as a whole, has been cut from most syndicated airings. 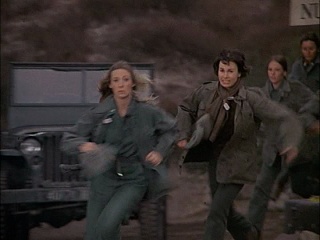 109 Replies to “Nurses of the 4077th: The Running Nurses in the Opening Credits”