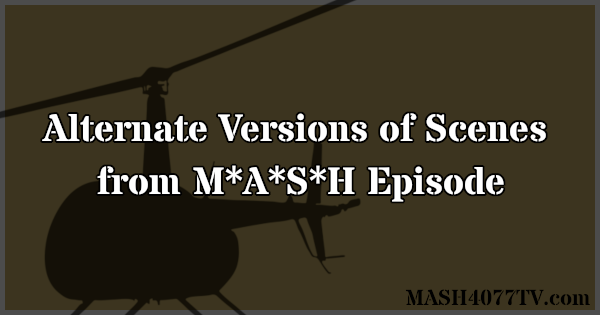 Every scene in every episode of M*A*S*H was filmed multiple times. That’s how television works. Scenes are filmed over and over again until the director is satisfied. Each version of a scene is called a “take” and there can be a dozen takes or more of a single scene before the director is ready to move on to the next scene.

Sometimes, the director calls for another take because they want an actor to deliver a line with more emotion or with the emphasis on a certain word. Other times, a take is ruined because an actor flubbed a line or an airplane flew overhead or someone pulls a practical joke. Once during filming, a member of the M*A*S*H production crew accidentally walked in front of the camera.

According to the 1991 retrospective “Memories of M*A*S*H,” it took 17 takes to film the scene in “The General Flipped at Dawn” when General Steele (guest star Harry Morgan) yells at Radar while reviewing the troops. McLean Stevenson and Gary Burghoff just could not hold it together and burst into laughter during take after take.

“What was going on was, McLean and I were falling apart. We did not expect Harry Morgan to be that funny. We had seen him in so many dramatic roles. So many wonderful character roles. We had never expected him to be that off-the-wall and he just killed us.”
Gary Burghoff – Memories of M*A*S*H (1991)

The final scene from the Season 3 episode “Abyssinia, Henry” famously had to be filmed a second time due to a technical problem ruining the otherwise perfect first take. But even though the scene had to be reshot, nothing changed from the first take. That was usually the case on M*A*S*H. Even if it took 17 takes to film a scene, nothing substantial changed from take to take.

There were a few exceptions, however. The following is a list of alternate versions of scenes from various episodes of M*A*S*H. I’m only including scenes that I know were filmed one way and then, for whatever reason, had to be filmed another way.

Jamie Farr makes his debut as Corporal Klinger in this episode, seen briefly on guard duty. He only has a handful of lines, speaking briefly with Colonel Barker. Director E.W. Swackhamer told Farr to play the character a certain way. When Larry Gelbart and Gene Reynolds saw the dailies, they weren’t happy and had Farr come back in to reshoot the scene.

Here’s a video of Jamie Farr telling the story of his first appearance as Klinger from his December 2011 interview with The Archive of American Television (now known as The Interviews: An Oral History of Television):

And here’s a transcript if you can’t watch the video:

“And E.W. Swackhamer, who was a guest director–and this is the first time this character shows up–has me doing it in more of a homosexual way, with lisping and whatever. But hey, I told you, I don’t fight with people. I come on, I get my salary, they ask me to do it, I do it, and I go home. So I’m doing whatever they ask me to do. So he had me do the other lines the same way.

Well, next day, I get a phone call. It’s Gene Reynolds and Larry Gelbart. They said, ‘Jamie, we can’t have this. This character couldn’t possibly exist this way. Can you come in? We need to reshoot it.’ And I go, oh my goodness, what have I done, this is terrible. I think I got $250 for the day. So they said, ‘We’ll give you another $250. Come on in, let’s talk.’

So they said, ‘What can we do with this? We can’t do it that way.’ And I said, ‘Well, why don’t you play the guy straight?’ In other words, he has a cigar, and he talks just like everybody else but he wears a dress trying to get out. I said, ‘Let everybody else comment on him. Not have him comment on himself. So that as far as he’s concerned this is perfectly normal, this is very natural for what he’s trying to do.’ They said, ‘Great, try it that way.’

Well, the rest is history, right? Came on for one day, stayed for 11 years. And that’s the way the character was played.”
Jamie Farr – Archive of American Television Interview (2011)

A few seconds of footage from the original interpretation of Klinger may have been included in a M*A*S*H blooper reel. Take a look:

The scene in which Hawkeye and Trapper argue with Major Arnold Morris at the 720th Evac, who’s hoarding three incubators, was filmed twice with two different actors playing Morris. But that’s not the whole story.

According to an October 28th, 1996 post to the alt.tv.mash newsgroup, the cast encouraged Gelbart to play the part and he even did a rehearsal with them before deciding to get an actual actor for the role. Vic Tayback was hired to play Morris. “Good actor that he was,” Gelbart explained in his post, “we weren’t pleased with his take on the part, so it finally went to a third man, whose name escapes me.”

Gelbart later repeated the story in a November 20th, 1998 post:

Originally, <I> was going to play the supply sergeant. I decided against it for a variety of reasons.

We then hired Vic Tayback for the role. I can’t remember why, but we weren’t happy about the way the scene turned out – so we hired another actor and reshot it with him playing the part that Tayback had and that I hadn’t.

So who ultimately ending up playing Major Morris? An actor named Ted Gehring, who later played Sergeant Rhoden in the Season 7 episode “None Like It Hot.”

In the 1991 “Memories of M*A*SH” retrospective, G.W. Bailey explained that the character of Rizzo was originally supposed to be from New York. After the producers watched the dailies from the first day of filming, they decided the character should be from Louisiana to better match Bailey’s accent.

“The character, whose name was Rizzo, and he was from Brooklyn. He was an Italian from Brooklyn. They watched the first day of dailies and the next day they sent down word that, no, he was from Louisiana. After they listened to me, they decided he better move from the Bronx to Baton Rouge.”
G.W. Bailey – Memories of M*A*S*H (1991)

Although Bailey doesn’t identify the episode by title, “The Yalu Brick Road” from Season 8 is the first episode he appeared in as Sergeant Rizzo.