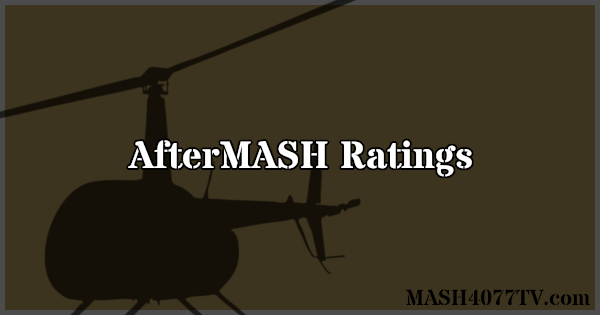 AfterMASH got off to a stellar star, topping the Nielsen charts during its first two weeks on the air. And although ratings fell somewhat as the 1983-1984 season progressed, the series continued to pull in solid numbers, and CBS renewed the series for a second season. However, the network moved AfterMASH from its Monday time slot to Tuesdays opposite NBC’s powerhouse The A-Team. Although the Season Two premiere — given a special broadcast on Sunday — ranked in the Top Ten, when AfterMASH moved to its regular Tuesday time slot the ratings sank.

The following Nielsen rankings come from a variety of sources, including The New York Times, The Associated Press and United Press International. Rankings are not available for every episode.

After two weeks as the number one show in the United States, AfterMASH fell to 4th and then out of the Top Ten completely the following week, ranking 17th. It would stay in the Top Twenty through the beginning of January 1984, edging into the Top Ten twice. For the 1983-1984 season as a whole, AfterMASH ranked 15th with a 20.1 Nielsen rating (12th if shows like Cagney & Lacey and Kate & Allie, which aired less than six episodes during the standard season are excluded). By comparison, M*A*S*H ended its final season with a 22.6 rating, tying for 3rd.

CBS shifted AfterMASH to Tuesdays to act as counter-programming to NBC’s popular The A-Team. That move was a mistake. Although the season premiere ranked in the Top Ten, it was a special Sunday broadcast prior to the Emmy Awards. The first episode to air in the new Tuesday slot plummeted to 56th in the Nielsen rankings. For the 1984-1985 season as a whole, AfterMASH either ranked 69th (if shows that aired less than five episodes are excluded) or 90th (if those shows are included). Either way, it had a 10.5 Nielsen rating, losing almost half its first season average.