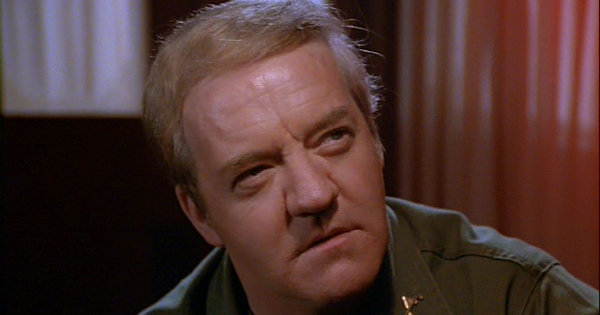 Actor Richard Herd, who guest starred in the Season 8 episode “Back Pay,” died earlier this week (May 26) at the age of 87. In the episode, Hawkeye sends the Army a $38,215.11! bill for medical services rendered in Korea. Herd played Captain Snyder, sent the Army’s Criminal Investigation division to investigate. Snyder doesn’t like Hawkeye and Hawkeye doesn’t like Snyder. Hawkeye never gets his money but with a little help from B.J. he does get some poetic justice.

Herd started his acting career in 1970. He’s perhaps best known for several recurring roles in television: he played Admiral Noyce in 12 episodes of seaQuest DSV, Mr. Wilhelm in 11 episodes of Seinfeld, and Admiral Owen Paris in four episodes of Star Trek: Voyager. He also had a starring role in the 1983 NBC miniseries V and its sequel, V: The Final Battle.

According to his Internet Movie Database profile, he made several acting appearances in the past few years, including episodes of Shameless and Hawaii Five-0, plus movies like Get Out, The Oath, and The Mule.

Obituaries can be found at The New York Times and Variety.