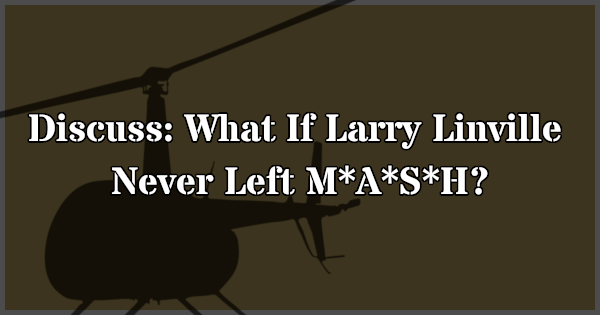 Today’s topic is: What if Larry Linville never left M*A*S*H?

First and foremost, with Frank remaining at the 4077th there would be no need to call in another surgeon, which unfortunately means the brilliant David Ogden Stiers would never have joined the cast as the obnoxious Charles Emerson Winchester III.

Of course, Larry Linville wanted to leave M*A*S*H because he felt he had done everything he could with the character of Frank Burns. Season 5 was a rough one for poor Frank. After Margaret ended their relationship, Frank was aimless and lost. He literally had nothing else in his life at the 4077th without Margaret, aside from butting heads with Hawkeye and B.J. While Margaret was happily engaged to Donald Penobscott, Frank was unable to move on. But what if he had?

What if Frank had started a relationship with another nurse (or multiple nurses)? What if he had found happiness in his surgical work, mediocre as it was? What if he hadn’t lost it after Margaret and Donald were married? What if he remained at the 4077th?

What, if anything, could’ve made Linville stick around? Somehow putting Frank and Margaret back together during Season 6? Possibly, but without other changes it would’ve meant a return to the status quo, something that probably wouldn’t have been enough for Linville. The problem with Frank is his limited depth, with or without Margaret. There wasn’t much, if any, room for Frank to grow after five seasons as a whiny, incompetent surgeon.

11 Replies to “Discuss: What If Larry Linville Never Left M*A*S*H?”