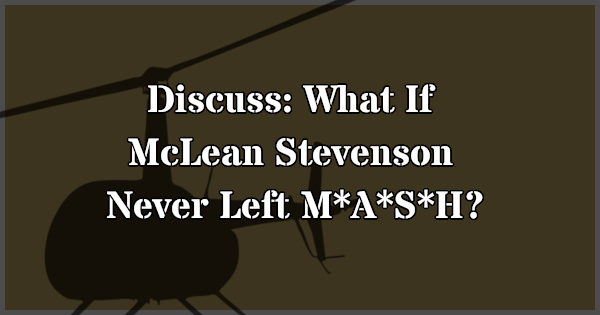 Today’s topic is: What if McLean Stevenson never left M*A*S*H?

Right off the bat, we know that Season 3 would’ve ended differently and Season 4 would’ve started differently. It’s likely Season 3 would’ve ended with just another weekly episode, nothing special and certainly nothing like “Abyssinia, Henry.” Season 4 would’ve started with Henry still in charge of the 4077th, not Frank. “Welcome to Korea” wouldn’t need to change much to include Henry. It would still involve B.J. arriving in Korea.

There would be no need for “Change of Command,” of course, and no need to bring in Harry Morgan as Colonel Potter. The question then becomes how easily Henry fits into Season 4 in place of Colonel Potter. The two characters are so different, I think quite a few Potter storylines wouldn’t work at all with Henry.

Frank and Margaret spent so much time during the first three seasons going over Henry’s head because they didn’t respect him or his authority. When Potter arrived, that dynamic changed. Potter commanded respect in a way Henry never could. Henry had his serious moments, of course, and it’s possible the writers would’ve decided to focus more on that aspect of his character. It’s hard to imagine Henry not evolving to some degree over the years. Maybe he’d stop drinking. Maybe he’d stop cheating on his wife.

If you’re curious about Henry and “The Interview,” in February 2006 Larry Gelbart wrote an interview for Henry.

How do you think Henry would’ve reacted to Radar leaving? How would he have departed the 4077th at the end of the series finale?

7 Replies to “Discuss: What If McLean Stevenson Never Left M*A*S*H?”