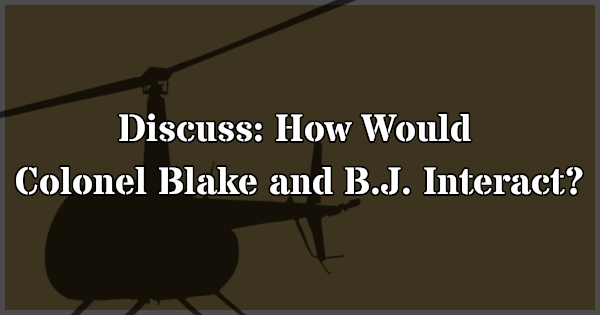 Today we’re discussing Colonel Blake and B.J. This is an interesting pairing because the two men are so different. Although Colonel Potter and B.J. were very different in many ways, they were both devoted husbands. While many of the other married men in camp fooled around with nurses, Potter and B.J. were faithful to their wives. I don’t recall off the top of my head whether the two ever discussed their marriages, it offered them something to bond over. Colonel Blake was not like Potter. Blake was unfaithful to his wife during his time in command. Would that have impacted how B.J. responded to Blake as a commanding officer?

Nearly everyone respected Colonel Potter. Many people at the 4077th may have liked Colonel Blake but it’s hard to say they all respected him. True, he had his rare moments when he displayed a commanding presence and offered sage advice or stern orders. He was also easily ignored and easy to manipulate. Hawkeye or Trapper weren’t openly hostile to Blake the way Frank and Margaret were but for the most part they thought of him more as a friend who happened to be in command rather than a superior officer.

There’s no way B.J. would blatantly disrespect Colonel Blake. He’d probably find ways to work around the C.O. to get things done. As for Blake, he would get along fine with B.J. because he got along fine with nearly everyone–except Frank and Margaret.

4 Replies to “Discuss: How Would Colonel Blake and B.J. Interact?”