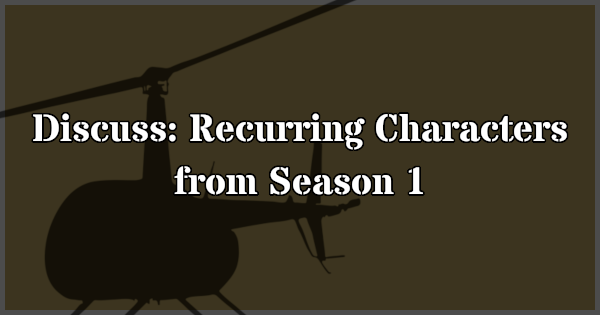 Too Many? Gone Too Soon?

Usually, my discussion topics are questions that ask readers to think about something from M*A*S*H and offer their thoughts and opinions. Today we’re shaking things up because there is no question to answer. What I hope to see is an open-ended discussion about the recurring characters from Season 1. (We’ve already discussed our favorite non-nurse minor characters from M*A*S*H.)

The first season featured a large number of minor characters in recurring or supporting roles. I’m including both Father Mulcahy and Klinger because neither William Christopher nor Jamie Farr were part of the main cast during the first season.

If I’ve forgotten any recurring characters or made any mistakes, please let me know. I used the end credits to come up with this list, so any uncredited appearances are not included. Not on the list are Lt. Dish, General Barker, or Lt. Jones, all of whom appeared in two episodes during Season 1. The pilot episode featured yet another character, a nurse named Knocko (played by Laura Miller, who has no lines in the episode) who is also in M*AS*H the novel and movie.

Aside from the few exceptions I’ve noted above, all of these characters disappeared after Season 1. Many disappeared partway through the first season, presumably because the writers decided there were too many characters. Getting rid of many of the minor recurring characters did allow Father Mulcahy and Klinger to grow as characters.

I’m particularly fond of Margie Cutler, in large part because I’m a big fan of Marcia Strassman, but also because Cutler felt more fleshed out than most of the other characters on the list. Because they had such minor roles in so few episodes, most of these characters aren’t very memorable. Other than the pilot episode, I’m drawing a blank trying to recall any storylines involving Ho-Jon, for example, and off the top of my head I can’t think of anything Spearchucker did.

Personally, I think the loss of so many minor characters made the 4077th feel like a smaller place after Season 1, even if there were still a number of nurses and corpsman regularly seen in the background.