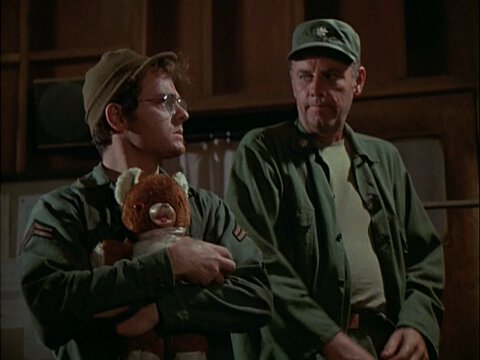 The original prop teddy bear used during the production of M*A*S*H was sold at auction by Gary Burghoff last month. The auction took place on March 27th online via One of a Kind Collectibles. The starting bid was $500 and there were 19 bidders involved. The final bid, with buyers premium, was $14,307.50. Burghoff included a notarized letter, which I have transcribed below, explaining what happened to the bear after the series ended.

The teddy bear offered in the one of a kind collectables auction on March 27, 2014, is the actual bear we used on MASH television series between 1971 and 1981. It is the ONLY bear used in the series.

When the series concluded in 1981, the bear mysteriously disappeared for nearly 30 years, prompting my non-ending search for my little on-camera companion and friend. It was conspicuously missing at the MASH exhibit of the Smithsonian Institute in Washington DC which was one of the most successful exhibits in Smithsonian history.

Finally, “TIGER” (as I had secretly named him), surfaced in a specialized show business memorabilia auction. It had been in the possession of the MASH set designer all along! A friend and I purchased it and TIGER has been in our care for many years.

The Radar Teddy Bear may be said to be the most famous teddy bear in the world today. MASH is still loved world-wide in more than 15 languages.

Tiger is a true 20th and 21st Century Television icon and, due to the importance of the MASH series, has a lasting place in American history.

My hope is that he will find a new home with a person or institution that understands the true value of this special American icon.

The auction Burghoff refers to was the July 29th, 2005 Profiles in History 22nd Hollywood Auction. The bear was sold for $11,000 (including buyers premium).