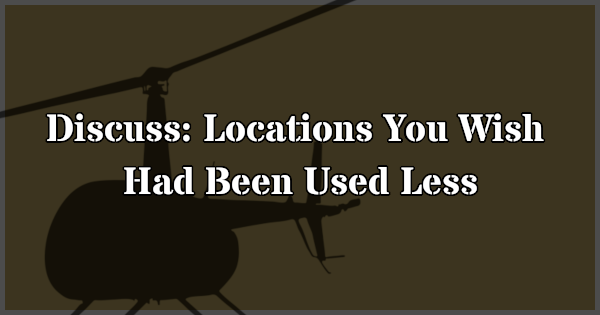 Today’s topic is: Locations you wish had been used less.

Too Many Scenes in the Swamp? The O.R.? The Mess Tent?

Last week’s discussion topic asked about locations that weren’t used enough. Today, we’re discussing locations that were used too often. Without sitting down and calculating how many scenes took place in every location, and how long those scenes lasted, there’s no way to know which locations were used the most on M*A*S*H. But I think it’s safe to say the top locations include the Swamp, the O.R., the C.O.’s office, the company clerk’s office, the mess tent, and the Officers’ Club (not necessarily in that order).

To be honest, I’m not sure any locations were used too often. At least none immediately come to mind. There were only so many places at the 4077th for people to meet and talk and certain things had to happen in certain places. Surgery in the O.R., important conversations in the C.O.’s office, relaxing and annoying Frank or Charles in the Swamp.

2 Replies to “Discuss: Locations You Wish Had Been Used Less”