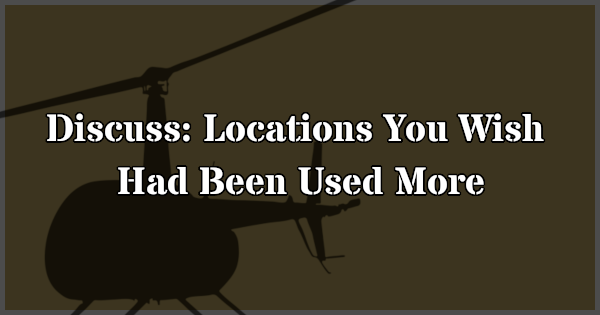 Today’s topic is: Locations you wish had been used more.

What Happened to the Camp Library?

Like nearly all sitcoms, most scenes in M*A*S*H took place in a small number of regular locations at the 4077th. There’s the Swamp, of course. The O.R. and the scrub room and the pre-op and post-op wards. There’s also the C.O.’s office, the company clerk’s office, the mess tent, plus quarters for various personnel (commanding officer, head nurse, camp chaplain, VIPs). Plus the showers, latrines, and supply tent. During Season 2, the producers and writers added a new location: the Officers’ Club. There was also Rosie’s Bar, located near the 4077th.

There were also several other rarely used locations, including the library, the x-ray room, the kitchen, the motor pool, the trash dump/garbage depot, the laundry tent, and others.

Which of these seldom seen locations do you wish had been used more on M*A*S*H? I’ve always wondered what happened to the camp library, seen for the first and only time in “M*A*S*H — The Pilot” when Hawkeye is pursuing Nurse Dish. Why wasn’t it used in later episodes? Did the writers forget about it? Did the producers declare it off-limits?

10 Replies to “Discuss: Locations You Wish Had Been Used More”