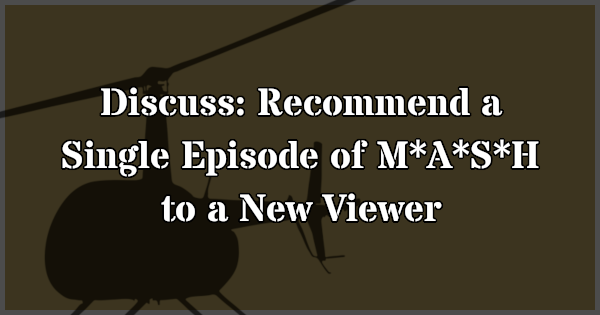 Almost exactly a year ago we discussed which season of M*A*S*H to recommend to a someone who had never seen a single episode of the show before. Today, we’re doing something even harder: picking just one episode of M*A*S*H a new viewer should watch.

The obvious answer is “M*A*S*H–The Pilot” because it’s the first episode of M*A*S*H and the episode that introduced the show to millions of viewers back in 1972. Without it, there wouldn’t be any other episodes. If it worked as a series premiere 47 years ago, it should work as a series premiere today, right?

I guess the single best episode to recommend to a new viewer depends on the viewer. Is it someone willing to commit to watching 11 season of M*A*S*H? If so, watching in broadcast order makes a lot of sense. But if this hypothetical new viewer is picky about the television shows they watch, maybe “Sometimes You Hear the Bullet” or “The Interview” are better episodes to recommend (for drama) or “Adam’s Ribs” or “Tuttle” (for laughs).

10 Replies to “Discuss: Recommend A Single Episode of M*A*S*H to a New Viewer”