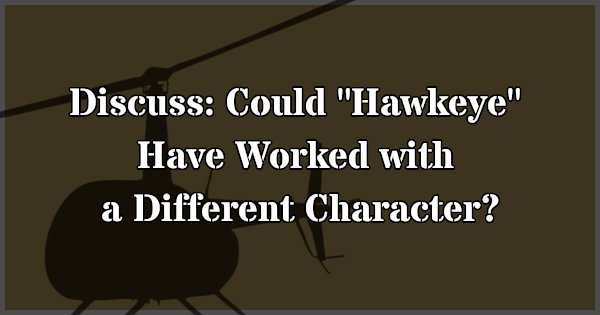 Today’s topic is: Could “Hawkeye” have worked with a different character?

“Hawkeye” is an episode many M*A*S*H fans don’t like. Personally, I don’t love or hate it. I appreciate it for what it was: an experiment to see if an episode could be built around a single character talking practically nonstop for 20+ minutes straight. Hawkeye, suffering from a concussion, knows he needs to stay conscious so he starts talking and doesn’t stop, even though the Korean family that found him after his jeep overturned can’t understand him.

Do you think the episode could’ve worked with any of the other characters? I’m not asking whether you think other members of the cast could pull off an episode-long monologue. This is about characters and their backgrounds and histories and what sort of material Gelbart and Muntner could’ve worked with to craft an episode like “Hawkeye” but featuring a different character. Could Klinger have rambled on about Toledo for 20 minutes? Could Margaret have talked about growing up a military brat? Could B.J. have shared stories about his family?

“Hawkeye” aired near the end of Season 4, but free to shift it to an earlier or later season to accommodate cast changes.

7 Replies to “Discuss: Could “Hawkeye” Have Worked with a Different Character?”