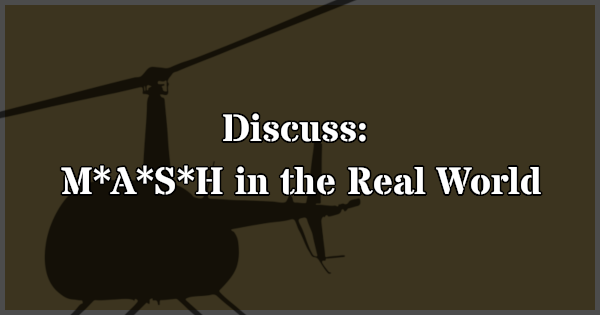 Today’s topic is: Have you encountered M*A*S*H in the real world?

I’ve kicked around this topic idea for a while but I had trouble coming up with a simple and easy way to explain it. Basically, I’m asking if anyone has ever seen or heard something about M*A*S*H in their everyday life, not online. References to M*A*S*H in other TV shows, movies, or books don’t count.

Have you seen someone wearing a M*A*S*H t-shirt or a M*A*S*H patch on their backpack? Heard someone humming the theme song? Eavesdropped on a conversation about the show?

If you’re old enough to have watched M*A*S*H during its original 1972-1983 run in the United States, you probably have some stories to share. Younger fans who started watching M*A*S*H long after the show went off the air may not.

I have seen someone wearing a M*A*S*H t-shirt but I don’t recall when or where. I can also remember driving past someone working on what looked like a 1950s-era U.S. Army jeep in their driveway. It had either “M*A*S*H 4077” or just “4077” painted on the side.