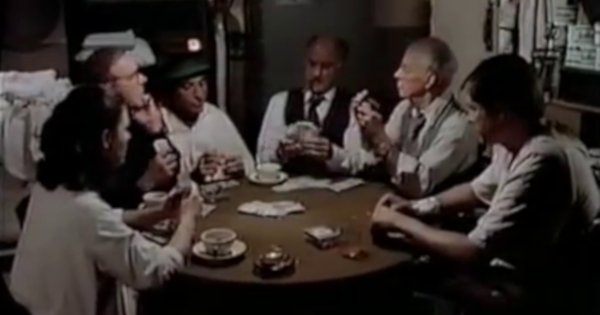 A drenching rainstorm that could turn the hospital into an evacuation center signals the start of a wild poker game.

On “AfterMASH”, as a flood threatens the hospital, the patients and staff play a wild game of poker

This is it, the final episode of AfterMASH. Viewers in the United States didn’t have the opportunity to see “Wet Feet” because CBS never aired the episode. It did air in other countries, including Australia. Someone uploaded a copy of the episode from Australia to YouTube in September 2016, finally allowing fans the chance to watch it.

It’s another packed episode, with multiple storylines tied together by a major storm and the threat of flooding. All medical personnel are on standby so Father Mulcahy suggests a poker game. Like the poker games on M*A*S*H, characters drop in throughout the episode, playing a few hands before they’re called away.

Alma Cox is happily at work as disaster coordinator because the hospital is the evacuation center for the county. She tries to seduce Wally Wainright into giving her her old job back, but he wants nothing to do with her. He does want the publicity that comes with being in charge of a hospital during a massive storm. Dr. Dudziak has a patient who doesn’t like the rain because it reminds him of Korea when the Chinese always attacked while it rained. Dr. Caldwell gets into trouble when he doesn’t realize a patient with a broken arm also has a ruptured spleen.

Also, Klinger insists he’s Noah, complete with robes and a pair of goats. And Bob Scannell wins big at poker by pretending he doesn’t know how to play.

There’s an impressive scene near the end of the episode when casualties from a twister show up at the hospital. Everyone goes to work. Klinger sheds his crazy persona to take charge of triage while Father Mulcahy helps a man with a neck wound.

“Wet Feet” is a regular episode, not a series finale. There is no ending for AfterMASH, no closure for the characters, no resolution to Klinger’s storyline. But it’s a solid episode and proof the show had unrealized potential.

Alma Cox attempting to seduce Wally Wainright in this episode is bizarre. She’s given such a large role in so many episodes yet adds nothing to the show. I’m convinced the writers weren’t sure what to do with her character once Mike D’Angelo was written out after Season 1. It’s frustrating to see her more than Father Mulcahy, who’s already small role during Season 1 became even more limited in Season 2. In “Wet Feet” he’s seen at the poker game and briefly during the triage scene.

Now that I’ve watched every episode of AfterMASH, I’m more certain than ever that CBS effectively killed the show by insisting on so many changes for Season 2. Klinger never should’ve gone on the run. If the network wanted him acting crazy again, which is a change I don’t agree with, it should’ve happened unseen between seasons, and Season 2 should’ve opened with him already in the psychiatrist ward.

As I’ve said before, adding Dr. Dudziak to the supporting cast during Season 2 was a smart move. I’m not convinced AfterMASH also needed Dr. Caldwell, although the character shows some potential. But he’s not all that different from Dr. Pfeiffer, who was written out halfway through Season 1.

AfterMASH is not a terrible show. It’s not even a bad show. It’s an uneven show, with a mix of solid episodes, mediocre episodes, and weak episodes. It had big shoes to fill as a spin-off/continuation of M*A*S*H, and it couldn’t fully fill them. No show could’ve lived up to the expectations of viewers. AfterMASH is not M*A*S*H and that’s the big problem. But it doesn’t deserve to be condemned as one of the worst TV shows of all time, as TV Guide did in 2002.

“Wet Feet” never aired in the United States. CBS scheduled the episode twice but pre-empted it both times. It was originally supposed to air on Tuesday, December 18th, 1984 but the network aired the animated special “Jim Henson’s Muppet Babies” instead. Months later, CBS scheduled two episodes of AfterMASH back-to-back from 8-9PM ET on Friday, May 31st, 1985: “Wet Feet” from 8-8:30PM ET and “Saturday’s Heroes” from 8:30-9PM ET.

At the last minute, after weekly TV listings were printed, the network altered its schedule to make room for a CBS News special about tax reform. According to daily newspaper TV listings, “Saturday’s Heroes” aired from 8-8:30PM ET, followed by a repeat of a 1983 made-for-TV movie called Listen to Your Heart from 8:30-10:30PM ET, and finally a CBS News special titled either “Tax Reform: Other Views” or “Opposing Viewpoints,” depending on the source.

“Wet Feet” also wasn’t the last episode produced. “Ward is Hell,” which aired in December 1984, was the ninth and final episode produced for AfterMASH‘s brief second season. A script for at least one additional episode (“All Day All Night, Mary Ann” by Ken Levine & David Isaacs) was completed but never filmed.

Soon-Lee and Mildred do not appear in this episode.

“And I didn’t even hear the choppers,” Klinger says after an announcement about incoming patients.

This is the 12th and final episode written or co-written by Dennis Koenig.

This is the second of two episodes directed by Hy Averback, who directed 20 episodes of M*A*S*H between 1972 and 1982.