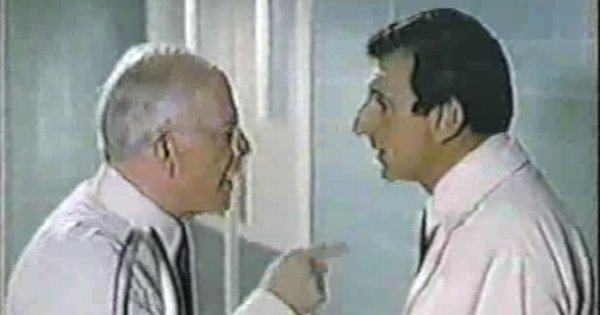 A new administrator arrives without fanfare to take stock of the general mess at General General. Meanwhile, Klinger poses as a doctor to avoid the police.

Klinger poses as a doctor to escape the police.

Alma Cox prepares for the arrival of General General’s new administrator but the administrator, Wally Wainwright, has other plans. He shows up unannounced so he can check out the hospital on his own. Klinger, meanwhile, dresses up like a doctor so he can sneak into Soon-Lee’s room.

When he runs into Wainright, Klinger introduces himself as Dr. Winston Habibi. He soon learns his family has left the hospital and moved in with the Potters. He’s then forced to give Wainright a tour. Wainright, who apparently realized who Klinger was right away, calls the police but Klinger is able to escape an ambush in the supply room.

Dr. Boyer is upset when Wainright suggests he shouldn’t be operating with only one leg, convinced he’s going to lose his job. But Potter threatens to quit if Boyer is forced out. As for Alma Cox, she’s given a new job: replace Klinger as Potter’s clerk.

Klinger interrupts dinner at the Potters’, posing as a meter man. The police show up and Klinger decides to make a run for it, even after Father Mulcahy threatens to knock him out. “It’d be like hitting my dog,” Father Mulcahy says before moving aside and letting Klinger leave through the back door.

Wally Wainwright isn’t quite the polar opposite of Mike D’Angelo. They’re both selfish, only interested in furthering their careers, but unlike the largely incompetent D’Angelo, Wainright appears to be sharp as a tack. Based solely on this first appearance, he also seems to be a little bit cruel.

The new Mildred Potter, played by Anne Pitoniak, appears briefly in the final scene and I’m not impressed. I don’t know why CBS felt the need to replace Barbara Townsend, who was perfect for the role of Mildred.

The best I can say about Klinger is he didn’t wear any dresses in this episode. It’s only the second episode of the season and I’m already tired of him being on the run.

Beginning with this episode, AfterMASH moved to Tuesday evenings where it faced stiff competition from NBC’s The A-Team.

Anne Pitoniak takes over the role of Mildred Potter in this episode and Peter Michael Goetz makes his debut as new hospital administrator Wally Wainwright.

In the M*A*S*H episode “Last Laugh” from Season 6, Klinger pretended he had a camel named Habibi.

After Klinger shares his plan to evade the law by escaping to Canada with his family, Potter tells him, “If you had told me any of this when we were in Korea, I’d have given you that Section 8 for sure!”

During surgery, Potter laments still removing shrapnel a year after the end of the Korean War. Boyer shares details of his time in Korea.

This is the first of two episodes directed by Hy Averback, who directed 20 episodes of M*A*S*H between 1972 and 1982.

This is the tenth of 13 episodes written or co-written by Ken Levine and David Isaacs.

This is the ninth of 12 episodes written or co-written by Dennis Koenig.