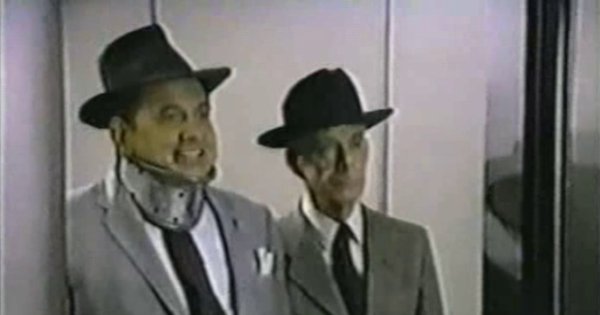 Dr. Pfeiffer gets the needle from an obnoxious patient with a personality and a face that Pfeiffer says “only a proctologist could love.”

Dr. Pfeiffer contends with an abrasive patient who seems to have nothing physically wrong with him.

After hitting a high note with “Fallout”, AfterMASH continues strong with “Bladder Day Saints.” Like “Fallout,” this episode sees Dr. Pfeiffer heavily involved in the primary storyline, alongside Potter. Once again, Father Mulcahy has little to do: he takes a photograph and has a few brief conversations, playing a small role in the secondary storyline, which features Klinger.

The primary storyline sees Dr. Pfeiffer confront a bitter, angry patient named Kraus who claims his back hurts. His back x-rays are clear and Potter confirms Kraus most likely wants to keep his disability checks rolling in. Unfortunately, Dr. Pfeiffer doesn’t play nice. Kraus has a connection with a Congressman, whose aide calls Mike D’Angelo and before long Dr. Pfeiffer is in trouble.

When another one of his patients dies, Dr. Pfeiffer explodes and takes out his grief on Kraus, potentially ending his career. But everyone who saw the confrontation says they didn’t see anything. Mike D’Angelo, who earlier in the episode was eager to throw Dr. Pfeiffer under the bus, is just as eager to play along if it means keeping General General out of trouble. “No corroboration, no altercation,” D’Angelo tells Kraus. “You have no witnesses. This didn’t happen.”

It’s taken a long time but Dr. Pfeiffer is finally starting to develop as a character.

Meanwhile, the secondary storyline sees Klinger runs into an old friend from Korea named Pete Sax. The two used to play football together. Klinger plans to get tickets to a football game but changes his tune when he learns his Pete lost a leg. For reasons never fully explained, Klinger can’t handle this information, and he tries to avoid Pete. After a chat with Father Mulcahy, Klinger realizes his friend hasn’t changed just because he lost a leg.

There also a minor plot point involving Klinger worrying about Soon-Lee volunteering at the hospital. It goes nowhere.

Mildred Potter and Alma Cox do not appear in this episode.

Bonnie Hornback is seen for the first time since “Shall We Dance,” the seventh episode of Season 1.

It’s unclear how Klinger and Pete Sax know each other but they were in Korea at the same time. Pete asks if any other members of his unit are at General General, so presumably he wasn’t stationed at the 4077th. However, Klinger specifically refers to Pete as “a MASH guy.”

This was the second of three episodes written by Everett Greenbaum and Elliot Reid. Greenbuam wrote 24 episodes of M*A*S*H between 1974 and 1978 with his previous writing partner Jim Fritzell, who died in 1979.