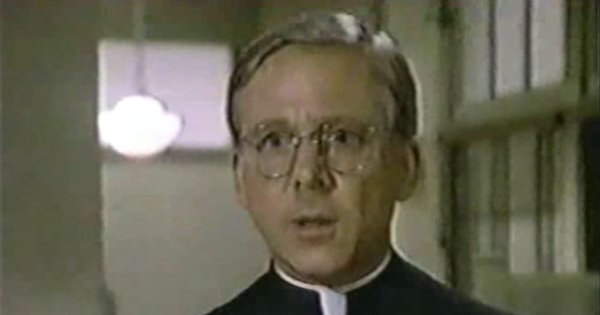 Potter and Pfeiffer are thinking of leaving the VA hospital, but the discovery that a patient’s leukemia may be linked to exposure to A-bomb tests gives them both pause.

Colonel Potter considers retiring from the hospital and moving to Florida.

I can’t say “Fallout” is the best episode of AfterMASH because I haven’t watched every episode yet. It is the best episode I’ve seen so far. Although flawed, it offers a glimpse of what AfterMASH could have been. The primary storyline is well-written and well-acted. The big problem? It’s a dramatic storyline, one of the few seen on AfterMASH so far. M*A*S*H is often accused of becoming too dramatic (or too maudlin) as time went by. Based on everything I’ve read, CBS wanted AfterMASH to be funny. The network wanted a comedy, not a drama.

Mike D’Angelo pushes back on the claim Warner’s leukemia is connected to his military service. He argues with Potter, firm in his belief the government would never expose soldiers to “deadly risk” without informing them of the dangers. D’Angelo also believes the nuclear tests were more important than any one individual soldier, even if that soldier dies.

There’s a bizarre sequence in which Joe Warner, talking to Father Mulcahy, imagines or remembers or hallucinates the Army chaplain who assured him how safe nuclear tests were. When Joe asks why the Army lied to him, why he has to die just for doing what he was told, Father Mulcahy has no answer.

“Fallout” includes a few minor storylines. Potter half-hardheartedly contemplating retiring to Florida contrasts well with Dr. Pfeiffer having the opportunity to move to private practice. Potter will never leave General General. He knows that and viewers know that. By the end of the episode, viewers are supposed to think Dr. Pfeiffer will never leave, either.

Soon-Lee and Alma Cox do not appear in this episode.

Father Mulcahy tells a patient his parents were expecting a girl, which is why they named him Francis.

Like a number of M*A*SH episodes, “Fallout” features several minutes of newsreel footage, watched by patients. Unlike M*A*S*H, which mostly used newsreel footage as filler, the newsreel in “Fallout” is about nuclear tests and therefore ties into the main storyline.

Michael Hirsh, who wrote and directed the wonderful PBS documentary “Making M*A*S*H,” worked as a researcher on AfterMASH. He shared the following details about “Fallout” in a post to the alt.tv.mash newsgroup in 1998:

All that said, if we did nothing else on AfterMASH we did the episode titled “Fallout”, written by Larry Gelbart, that dealt with the plight of the so-called “atomic veterans,” the guys who were exposed at the nuclear bomb test sites. And we did this in 1983, long before theirs became a cause celebre, but after these men had begun contracting all sorts of cancers. If nothing else, it was a good metaphor for the agent orange situation being faced at that time by Vietnam vets..who were up against a VA that didn’t want to recognize the problem. That’s exactly what happened with the atomic vets. Larry came up with that story idea…and as a result, somewhere around 15 million Americans were enlightened on the subject. That’s a whole lot more than would see a documentary about it on PBS.

And as long as I’m talking about “Fallout,” here are a couple of anecdotes about it: we asked CBS to give us the ten second promo spot prior to credits where they normally promote other shows. We wanted to put up the 800 number for the national association of atomic vets. CBS said no.

And while we were working on the script, CBS turned it over to their “Drama Based on Fact” unit. They demanded that we prove just about every sentence in the script that contained a factual reference. I had a stack of research about 2 feet high that they wanted to see. At one point, they called and demanded to know where we got the info that there had been 14 atomic tests at the island of Eniwetok….because there had only been 13, they said, with a lot of attitude. I looked through the files, and said I got the number from a 60 Minutes transcript of a piece that Morley Safer had done. “Well, it’s wrong,” said the network person, pleased at having caught us in an error. And I said, “It’s nice to know you’re holding a sitcom to a higher standard of journalistic accuracy than you hold 60 Minutes.” There were a few “harrumphs,” and that was that.

While complaining about bureaucracy, Potter compares working at General General with working at a M*A*S*H unit.

Mike D’Angelo tells a trio of future doctors that Potter is a “three war man,” mentioning his service in Korea and both world wars.

Klinger tells Dr. Pfeiffer all about his experience in the Army, including how he used to wear dresses to try to get a Section 8 discharge. He says nobody believed him, except one doctor who wanted Klinger to have his baby.

This was the third and final episode written by Larry Gelbart, who also wrote the first two episodes (“September of ’53” and “Together Again”).

This was the first of two episodes directed by Larry Gelbart.