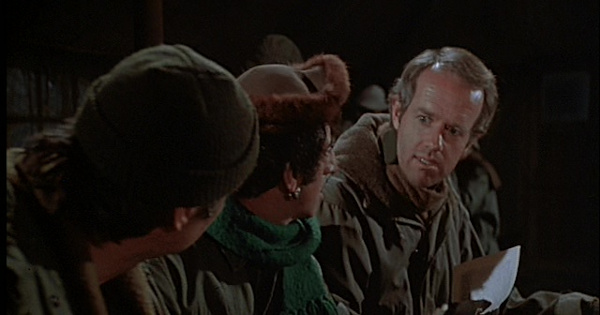 Capsule Summary: The 4077th becomes obsessed with a mystery novel as a distraction during a supply shortage.

Who else wants to read The Rooster Crowed at Midnight–“another brain-teasing, spine-chilling whodunit from the prize-winning pen of Abigail Porterfield”–whenever they watch this episode? The Monster M*A*S*H Wiki has a lengthy article about the novel that includes plot details and a cast list.

Watching “The Light That Failed” requires suspending some disbelief. Has literally every single person at the 4077th read every single book in camp? Who is keeping track of where each chapter is and who gets to read which chapter next? More importantly, when B.J. discovers the missing last page, everyone else is still reading earlier chapters. So why does he reveal the identity of the killer, spoiling the ending for everyone? He’s wrong, but they don’t know that.

The Charles B story is uneven. As is the case with many Season 6 episodes, the writers are still working out his character. They know he’s pompous but unlike Frank, a truly talented surgeon. Here they’ve given him Frank’s cowardly streak and it’s not a good look for Charles. He follows Hawkeye out of Post Op, appealing for reassurance that he’s not at fault, acknowledgement that he can admit he made a mistake.

Hawkeye blows up, furious at how self-absorbed Charles is. He may technically be a brilliant surgeon, but he’s selfish and only cares about himself. Charles accuses Hawkeye of being jealous of his talent. Later, during the tag scene, he grudgingly admits Hawkeye had a point and promises to care more about his patients. Sadly, the scene is played for laughs, with Charles trailing surgical gauze after him like toilet paper stuck to a shoe.

Charles reading to Margaret hints at the possibility of a romance between the two, something that pops up in several Season 6 episodes. Thankfully, the writers wisely decided not to pursue it.

The 20th Century Fox prop department had to use a real book to make the prop The Rooster Crows at Midnight hardcover. I wonder what book they used. I also wonder if someone walked off with the remnants of the prop as a memento.

When Klinger rushes into the OR with a light bulb, he knocks into a tray of medical equipment. At first, I thought this was a mistake left in by the director. But Klinger also knocks into the tray when he leaves the OR looking for a light bulb. Either Jamie Farr had an off day during filming, or this was planned in advance.

13 Replies to “Episode Spotlight: The Light That Failed”