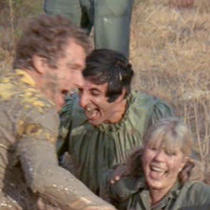 NOTE: This is my 225th Episode Spotlight, which means there are just 26 episodes left to review.

Capsule Summary: The 4077th enjoys a lecture, a Shirley Temple movie, and a picnic and barbecue.

A very loosely structured episodes, “Bulletin Board” features Henry’s third and final camp lecture, on the topic of birth control. His first lecture, about marital sex, took place in “Dear Dad” during Season 1; he delivered his second, on venereal disease, in “As You Were” during Season 2. Personally, I think the first lecture is the must amusing while the one in this episode is the weakest.

Posted to the camp bulletin board during the episode are the following: Henry’s lecture, payroll savings bonds, the movie in the Mess Tent at 1900 hours, and the the first annual Polly Adler Birthday Cookout Picnic and Barbecue. Curiously, there’s a PA announcement about the morale benefits of writing home rather than a notice on the bulletin board.

The savings bond plot point gives Margaret her only involvement in the episode. She wants to borrow money from Frank to give to her younger sister as a wedding present. Frank isn’t interested but, after Margaret gives him the cold shoulder, he relents and agrees to lend her the money if she’ll sign an IOU and pay interest. That’s Frank.

For the first time, someone other than Hawkeye writes home. In a letter to his seven-year-old daughter Becky, Trapper describse the Swamp, his roommates, and how he helped save the life of a wounded soldier who survived only because he suffered from severe hypothermia. Wayne Rogers does a fine job with his facial expressions while sitting in the Officers’ Club finishing the letter. “You know, I’d like to be able to tell you when I’m coming home. But for a while now, all I can do is stay here, and make the best of it.”

The picnic and barbecue looks like a lot of fun. There’s music, food, (hot dogs, fudge, lemonade, cup cakes), a hula dancer, a Punch and Judy show, a kissing booth, balloons, and games (a water transfer relay, a foot race, and tug of war). Frank winning the foot race and a lacy black bra is hilarious.

It looks like the cast had a blast filming the tug of war scene. Goldman and Igor won or at least were the only participants not to end up in the mud. Rumor has it you can hear members of the cast talking while in the mud. I’ve watched and rewatched the scene several times and I think someone says “Can you believe this?” Also, it’s obvious Alan Alda is saying something in the mud but I can’t quite understand what it is.

During the tag, various bits of news are delivered over the PA. However, the timeline doesn’t work. Clark Gable’s divorce from Lady Sylvia Ashley was finalized in April 1952 but it may have been announced much earlier. Dwight D. Eisenhower, campaigning for President, delivered his “I shall go to Korea” speech on October 24th, 1952. 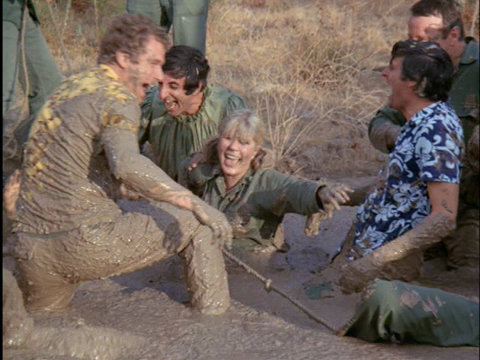 Having fun in the mud.

In April 2000, Larry Gelbart was asked at the alt.tv.mash newsgroup if he had any behind-the-scenes stories about filming the barbecue scene and if any of the extras were family members of the cast or crew. Here’s his response:

Most of the shows I participated were done in a pleasant, constructive atmosphere. I don’t remember this one as being memorable in any way. Who knows? Maybe something *did* happen that bouyed [sic] us all on that particular filming, but time has the final cut and that memory seems not to have survived.

I’m pretty sure there were family relatives involved. Not to [sic] professional, that kind of thing. And we liked to give working actors work.

Watch closely and you’ll see Igor taking part in the jam session at the picnic. Jeff Maxwell revealed in a June 2007 alt.tv.mash post that he was rubbing two pieces of toast together:

For some reason there was a plate of toast sitting close by. I would “play” a pair of toasts down to crumbs and grab two more until it all disappeared. Too bad I wasn’t closer to the camera. It was pretty funny.

(For the record, the rest of the “band” consists of Radar drumming on an empty fuel barrel, Zale drumming on a jerrycan, and another soldier banging a spoon against a metal container.)

Margaret’s younger sister, the captain about to get married, is never mentioned again. There’s also a reference to her dead father who shows up alive and well “Father’s Day” during Season 9.

11 Replies to “Episode Spotlight: Bulletin Board”