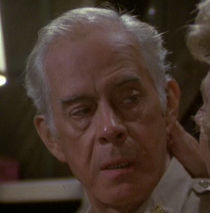 Capsule Summary: Radar starts to worry when Colonel Potter takes an interest in a visiting female colonel. Meanwhile, Hawkeye becomes obsessed with learning what B.J.’s initials stand for. And Margaret thinks about her future in the Army.

This episode features three distinct plotlines, two of which involve the title character. The A story is the friendship (and almost more) between Colonel Potter and Colonel Lillian Rayburn. The B story is Hawkeye trying to get B.J. to reveal the meaning of his name. Finally, there’s a minor C story about Margaret.

Am I the only one who thinks Radar should mind his own business? I suppose some may call it sweet how Radar is so protective of Colonel Potter. But Sherman Potter is no Henry Blake. Out of everyone at the 4077th, Radar should know there’s no way Potter will cheat on his wife. Hawkeye hit the nail on the head: Colonel Potter just wants to talk to someone his own age.

Also, why does Radar get suspicious so quickly? Colonel Potter volunteering to show Colonel Rayburn around the 4077th doesn’t seem all that unusual. Maybe Radar’s “radar” picked up on something. I do feel a little bad for him. His suspicions are seemingly confirmed by Margaret and Klinger but, in my opinion, the two are joking with Radar, swapping innuendo and suggestions that only make him more concerned.

Hawkeye’s obsession with learning what B.J. stands for is hilarious. The scene in Colonel Potter’s office when Hawkeye’s interest is piqued is well done. Hawkeye and B.J. have a conversation about B.J.’s name in the background while Colonels Potter and Rayburn talk in the foreground. Viewers watching this episode back in 1978 didn’t have the option of rewinding the scene to catch both conversations.

Blink and you’ll miss Margaret’s C story. It consists of a brief conversation between Margaret and Rayburn plus an even briefer followup in the Officers’ Club. At first, Margaret just seems (over)eager to please her superior during an inspection. Only later is it clear Margaret sees herself in Colonel Rayburn and she wants to know whether the older woman worries about being alone. Rayburn reassures Margaret and Margaret, in turn, tries to pass on that reassurance to Klinger.

Colonel Potter realizes Lil is interested in more than friendship.

Anyone know what the machine Charles asks Father Mulchay to move does? Blood transfusion? Oxygen?

This episode takes place around September 10th. Klinger mentions the date while talking to Margaret in the Officers’ Club.

Hawkeye makes two guesses about B.J.’s name. Which is better? Belvedere Jehoshaphat or Benito Juarez? I wonder if scriptwriter Sheldon Bull came up with additional guesses that didn’t get used.

Radar yells at the unseen voice on the PA system. It may be the only interaction between one of the characters and the mysterious announcer–this episode, Sal Viscuso.