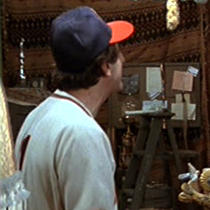 I like both of the storylines in this episode but not necessarily the balance between them. A little too much time is spent on Klinger’s storyline (which I suppose makes it the A story) which doesn’t leave much room to develop the Sergeant Michael Yee storyline. That’s too bad, because it’s something that deserves more attention.

Off the top of my head, I can’t think of any other episodes that touched upon the issue of Asian soldiers in the U.S. Army and their feelings about fighting North Korean and Chinese soldiers. South Koreans fighting North Koreans, to the point of brother fighting against brother, came up once or twice (in “Communication Breakdown,” for example).

The mystery of why a decorated soldier like Sgt. Yee would attempt suicide unravels once Sidney talks to him. He fought in Europe during World War II. It wasn’t until Korea that he had to point a gun at an Asian enemy. The guilt ate him up inside so he volunteered for the most dangerous missions, hoping to get himself killed.

The episode ends on a seemingly positive note for Sgt. Yee but I can’t help but worry about him. After being hypnotized, Yee thinks it’s been just five since Sidney came over. He learns from Nurse Kellye that two hours have passed. There’s a brief shot of his face as he digests this information. It almost makes me wonder if Yee realized something happened to him. Hopefully the hypnotic suggestion that he twitch his hand rather than try to kill himself sticks.

That brings us back to Klinger and his wacky decorations. They’re over-the-top, obviously, as are the reactions from Hawkeye, B.J., Margaret and Charles. Even if they’re joking, the comments they make are hurtful and almost out-of-character, except perhaps for Charles. Even when Hawkeye and B.J. try to apologize, they’re still making fun of Klinger. But it’s all necessary to push Klinger to the breaking point so he’ll attempt to forge the discharge papers required to get him home.

His plan to transform into Sven Lundgren works. Or at least the first step of the plan–outsmarting the entire United States government–works. Poor Klinger has to race to I Corps and impersonate Radar in order to get the discharge papers back. Somehow, that crazy scheme works out, too.

What I like best about Klinger’s storyline is that he interacts with B.J. and not Hawkeye. This exchange is hilarious:

B.J.: “You said you weren’t gonna go through with it, Sven.”
Klinger: “And you believed me?”
B.J.: “Whatever. I’m not providing you with a getaway jeep.”
Klinger: “I don’t want to get away. I want to stay.”
B.J.: “Then stay.”
Klinger: “Are you kidding? If I stay, I’ll be arrested for forgery.”
B.J.: “Then you are going?”
Klinger: “Going? How could you even suggest a thing like that? After he put his arm around me? Told me to pick out my very own doodads? Signed his moniker? Told me to have a bang-up trip with those big blue eyes?”
B.J.: “Okay, okay. A man can resist only so much gibberish. Take the jeep.”
Klinger: “Oh, thank you! Thank you! You’re a gentleman and an officer.” 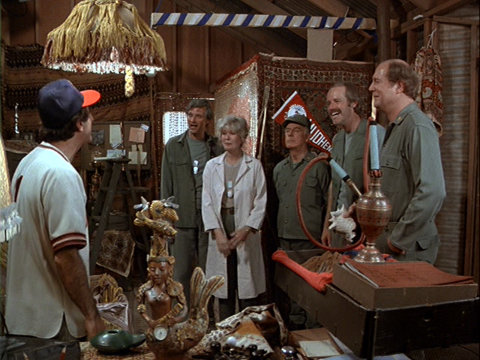 Colonel Potter references a DuMont television set. DuMont both manufactured TV sets and operated a television network. The network folded in 1956 and is mostly forgotten today.

When defending his decorations, Klinger mentions personal items the characters have: Margaret has chintz curtains; Hawkeye and B.J. have their still; Charles has a red velvet pillow; and Colonel Potter has his saddle and a thumb painting.

Clyde Kusatsu made a total of four guest appearances on M*A*S*H He played Kwang Duk in “Officers Only” and “Henry in Love” during Season 2, then came this episode, and finally he played Captain Yamato in “The Joker is Wild” during Season 11.

Rizzo is mentioned but not seen.