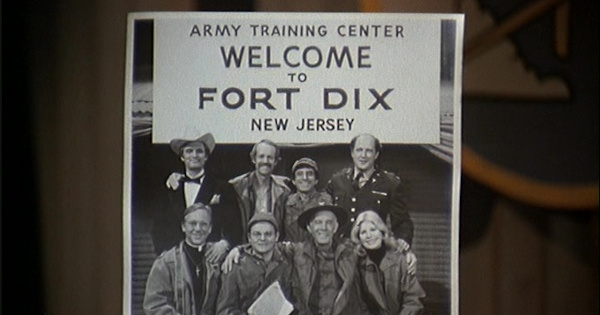 Capsule Summary: B.J. gets obsessed with the idea of getting relatives back in the States together for a party but Klinger worries his mother will find out he’s stationed in Korea. Meanwhile, the 4077th bugs out.

Hawkeye calls Charles a weak link for not wanting to participate in B.J.’s stateside party, but the weak link in this episode is Klinger and his storyline. M*A*S*H got a lot of mileage out of Klinger and his wacky family members, many of whom he may have made up. He explains in “The Party” that his parents don’t speak English and his mother believes he’s stationed at Fort Dix in New Jersey. He’s been sending her photographs every month so she doesn’t worry about him being in Korea.

That’s sweet and all, but it sort of falls apart when you think about it. For one thing, if I recall correctly, in Season 4’s “The Interview” Klinger says hello to his parents. More importantly, we’re supposed to believe everyone in Klinger’s family has been lying to his mother? More precisely, we’re supposed to believe Klinger believes his entire family has been lying to his mother?

What makes the least amount of sense, however, is why Klinger’s mom–assuming she truly did believe he was stationed at Fort Dix–wouldn’t think it a little strange that family members were gathering for a party in New York City when New Jersey is so close? I know I’m really overthinking this. It’s not a big deal and it doesn’t ruin the episode. It just bugs me.

The idea of gathering family members for a party is a nice one. It’s amusing to see how wrong nearly everyone was about their relatives not wanting to get together. Hawkeye was wrong, Margaret was wrong, even Charles was wrong. His reaction upon reading that his parents were interested in attending is perhaps the best part of the episode.

The montage in which the characters try to find a date for the party that works for everyone is unusual but effective. M*A*S*H didn’t often use montage sequences. I wonder how much time passed during this episode. The 4077th was bugged out for roughly three weeks and it must have taken many more weeks–if not months–to send letters back and forth to the States planning the party. To be honest, I think the episode would work better without the bug out plotline. The ending feels rushed. I wish we heard more about the party.

Finally, it’s never confirmed whether relatives of other people at the 4077th attended the party or just the main characters. During the convoy, when everyone is reading their letters, Kellye excitedly tells B.J. the party is on. This suggests to me that her family was involved. Otherwise, why would she be so excited?

According to the Internet Movie Database, producer Burt Metcalfe made an uncredited appearance in this episode as a driver. Anyone know the source for this or where he supposedly appears?

Margaret mentions her divorced parents. Earlier in the series, her father was supposedly dead. He later appeared in “Father’s Day” during Season 9, when the divorce was mentioned again.

28 Replies to “Episode Spotlight: The Party”