Capsule Summary: Margaret’s father visits the 4077th and she goes to great lengths to try to impress him. Meanwhile, Hawkeye and B.J. try to hide a side of beef given to them by a grateful patient.

I was excited when this episode was randomly selected for this week’s review because I momentarily confused it with “Sons and Bowlers” from Season 10 and was looking forward to rewatching Charles and Hawkeye bonding. I soon realized my mistake. Unfortunately, “Father’s Day” is nowhere near as good an episode as “Sons and Bowlers.” The beef B-story is practically nonexistent which means there is far too much emphasis on the weak A-story involving Margaret and her father.

It’s one thing for Margaret to be excited to see her father and want to impress him, especially considering his own military background, but her behavior in this episode is just too much. Margaret often got carried away and yelled a lot, particularly in the latter years of the series. Sadly, it became more or less her only character trait as time went by and being the focus of the A-story only made things worse.

We never learned much about Margaret’s personal life outside the Army. Earlier in the series her father was supposedly dead. In “Hot Lips and Empty Arms” (Season 2) she said to Colonel Blake “Do you know you look just like my father before he died?” And in “Bulletin Board” (Season 3) after she came to him looking for a loan, Frank asked if Margaret’s father left her any money, suggesting he was dead. Margaret also mentioned a younger sister in that episode but was otherwise almost always described as an only child. Of course, she also said her mother was a drunk and a kleptomaniac, so she was likely playing fast and loose with the truth.

In this episode we learn that her parents are divorced but don’t get any details. Alvin “Howitzer” Houlihan is a retired Army colonel who loathes discussing his feelings or opening up emotionally. It would probably be accurate to say that had something to do with his divorce. As Colonel Potter points out, he was apparently willing to let Margaret think he was disappointed in her rather than admit weakness.

There’s nothing wrong with Margaret’s father being a cold, distant man. There just isn’t enough to the storyline to fill the bulk of an episode. Margaret desperately wants to please her father and over analyzes his every word, every breathe, for some clue to whether she’s disappointing him. Colonel Potter’s rant is justified, if a little over the top, and fits with his character being something of father figure at the 4077th.

As I mentioned earlier, the B-story in which a grateful patient gives Hawkeye a frozen side of beef is little more than filler. It’s perfectly harmless and totally forgettable. 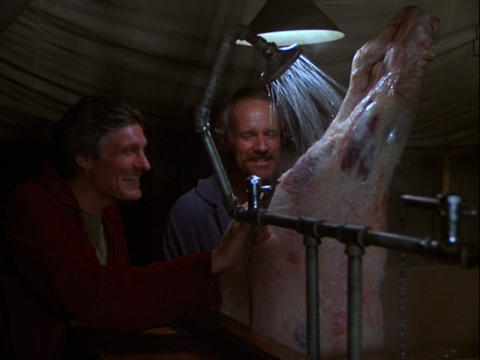 “Talk about ‘whetting’ your appetite.”

Father Mulcahy and Charles have miniscule roles in this episode, shoehorned into the B-story. Klinger has only marginally more to do.

Would the 4077th have the capacity to handle preparing and cooking an entire side of beef?

B.J. mentions Margaret’s father sending a “camouflage negligee to prevent sneak attacks.” She tells him to can it. If it’s a joke, it’s a bizarre one for B.J. to make. If it’s not a joke, it doesn’t seem like something “Howitzer” Houlihan would do.

Andrew Duggan was a very tall man. He towered over Loretta Swit (and everyone else).