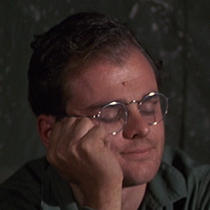 Note: This is the 200th installment of my Episode Spotlight feature. That means I have 51 more episodes to review and should wrap things up in October 2017. The very first episode I reviewed was “Major Ego” back in January 2013.

Capsule Summary: Hawkeye and Trapper worry about Radar, who is down in the dumps, and eventually learn he received a Dear John recording. They try to set him up with a pretty, intelligent nurse recently transferred to the 4077th.

Ah, the famous “Ah, Bach” episode. To be honest, I don’t consider it a great episode. I don’t think either of the storylines are particularly strong. Radar’s A story takes forever to get going and even after Lt. Anderson arrives it never really picks up much steam. The B story involving Margaret and Frank is silly at best, dumb at worst.

Hawkeye and Trapper trying to teach Radar to act sophisticated is amusing but also cruel. Their goal is to heal Radar’s broken heart by setting him up with a nurse. Do they really think they’re helping him by pushing him toward Lt. Anderson? That teaching him a few phrases and telling him to look bored will impress her? It’s ridiculous.

Curiously, none of the women at the 4077th wanting to date Radar is the reverse of “Edwina” in which none of the men want to date a klutzy nurse. Radar falling for a sophisticated nurse is later revisited in “Springtime” during Season 3 only he has better luck.

I don’t know what to say about the B story. Margaret and Frank trying to sneak away for some quality private time only to be kept apart by Hawkeye and Trapper isn’t really a storyline. It’s not funny and it’s not believable. Supposedly, Hawkeye, Trapper, and Radar are able to keep them apart for weeks. That doesn’t seem realistic. 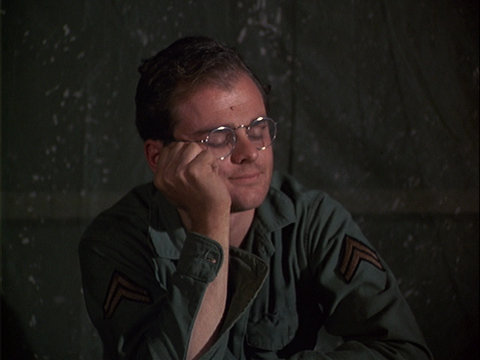 Radar is bored by Lt. Anderson

Fans have speculated about who provided the voices for Linda Sue and Elroy Fimple. Mary Kay Place has been put forward as the voice of Linda Sue. However, Larry Gelbart stated in a June 2003 post to the alt.tv.mash Usenet group that Mary Kay Place was not the voice of Linda Sue. Unfortunately, he couldn’t recall who did voice her. As for Elroy Fimple, some fans think actor Dennis Fimple (who guest starred in “Tuttle” as Sparky) provided his voice. I don’t believe there has been confirmation one way or the other.

When Hawkeye, Trapper, and Radar are eating lunch with Lt. Anderson, the edge of the tent can be seen in the upper left, revealing the scene was filmed on the Stage 9 sound stage.

If I recall correctly, the shot of Colonel Blake catching his finger on one of the fishhooks on his hate was heavily featured in promotional spots for M*A*S*H on FX in the late 1990s or early 2000s.

Barbara Brownell made her second and last appearance on M*A*S*H in this episode. She previously guest starred in “The Moose” playing the same character (Lt. Jones).

Indira Danks, who played Lt. O’Brien in this episode, is better known as Stefanianna Christopherson and was the original voice of Daphne during the first season of Scooby Doo, Where Are You!

I believe Sheila Lauritsen can be seen sitting in the Mess Tent in the tag scene when Lt. Anderson is boring Radar with talk about musicians being subsidized by wealthy patrons.