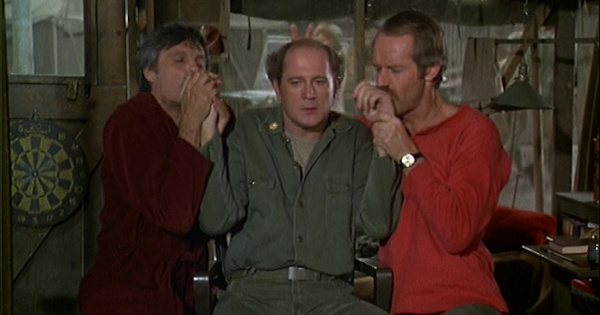 A few words about Spotlight, a new weekly blog feature I’m introducing for 2013. I’ve long considering reviewing every episode of M*A*S*H and even seriously thought about trying to review one episode every weekday (leaving the weekends free to catch up on viewings). But I just don’t have the time for that. I do feel fairly confident I will be able to write one of these spotlights once a week (at this rate, it’ll only take about five years). I’ve already finished three so I’m a little bit ahead. I decided to use a random number generator to pick the episodes rather than start at the beginning. We’ll see how that works.

Capsule Summary: After he revives a patient with heart massage, Charles’s ego gets a large boost, and things just get worse when a writer for the Stars & Stripes magazine comes to write an article about his skills.

I very happy to report that the random number generator chose an episode I really enjoyed to kick of Spotlight even if I did have issues with the B story involving Margaret and Captain Greenleigh. The best part of the episode was without a doubt the C story in which Klinger dressed up as Scarlett O’Hara from Gone with the Wind, Dorothy from The Wizard of Oz and Rosa Moline (played by Bette Davis) from Beyond the Forest. One has to wonder where he gets these outfits, particularly the hair for his Dorothy getup (not to mention the basket and the little dog, too). Perhaps the most amusing moment came when Potter tried, and failed, to get out of his office before Margaret could storm in.

The main plot involving Charles and his incredible expanding ego worked well. It fit his personality completely to act and react the way he did to hesitating and nearly losing a patient. Lesser doctors would probably use it as a teachable moment. But not Charles. No, Charles ignored the hesitation and focused solely on the resuscitation. His obvious concern over sharing the spotlight when the Captain Greenleigh was interviewing the patient was classic Charles. So, too, was his change of heart after making a mistake with another patient and refusing to allow the article to be published.

I really didn’t like the B story that saw Margaret pursued by Captain Greenleigh only to turn the tables and pursue him. For some reason, and I don’t know if this is some sort of double standard on my part, something about Margaret’s aggressive sexuality in this episode felt wrong. The reason I don’t think it’s a double standard is because her and Frank’s “aggressive” relationship never bothered me nor did the episodes featuring Scully. I think it was just something about this particular episode and this particular relationship.