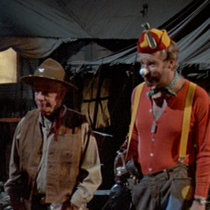 Capsule Summary: The doctors swap ghost stories while dealing with a Halloween deluge, Hawkeye tries to help a soldier traumatized by the death of his friends, and a dead soldier turns out to be not-so-dead.

I swear the timing of this spotlight is entirely coincidental. I use a random number generator to pick which episode to review and “Trick or Treatment” just happened to be picked for today. Eerie coincidence, right?

This was the only Halloween episode of M*A*S*H and it’s not the strongest episode. At times it feels very disjointed. It features a mix of comedic and serious storylines. In total, there are four storylines: ghost stories in the O.R., drunk marines, Private Scala, and the dead soldier who returns from the dead.

I’ll start with the scary stories. They’re shared throughout the episode.

I wonder if a story was written for B.J. and either not filmed or cut from the episode for time.

Private Scala’s storyline is depressing. The poor guy is starving himself because his buddies were all killed while he was standing in line for seconds. He only survived because he was a pig and can’t even look at food now. Hawkeye suggests Scala talk with Sidney Freedman but Scala doesn’t think anyone will be able to help him forget what happened. Hawkeye says he has to learn to live with it. There’s no resolution to this storyline, either, which only makes it more depressing.

Finally, there’s the dead soldier who isn’t dead. He arrives with wounded soldiers and is left in the compound until Graves Registration can come get him. Hawkeye later asks someone to cover him up with a sheet. Nobody notices is hand move. He’s alive. It’s only when Father Mulcahy starts administrating the Last Rites that he realizes the unnamed soldier isn’t dead.

“This is definitely one ghost story nobody is going to top,” Hawkeye declares. Unfortunately, Charles wasn’t around to offer his thoughts. He’d probably blame everyone for not checking the man’s vitals and assuming he was dead because he had a toe tag on.

In the tag scene, B.J. and Hawkeye get their revenge on Charles, who laughed at all the scary stories, by tying a rope to the side of the Swamp to trick Charles into thinking there was some sort of ghost or poltergeist at work. 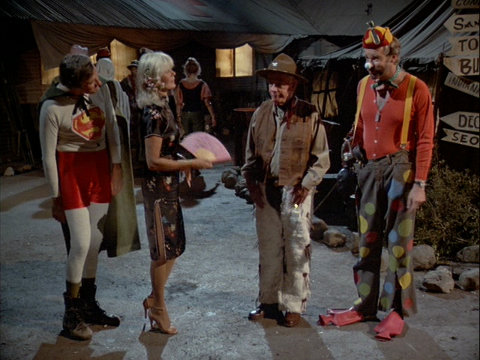 Superman, a Geisha, a Cowboy, and a Clown standing around.

“Trick or Treatment” was the first of 10 episodes produced for Season 11.

When Hawkeye, B.J., Margaret, and Colonel Potter gather in front of the Swamp to show off their costumes, several other characters can be seen in the background also wearing costumes. There’s a ghost, a sailor, a clown, and several other unidentifiable costumes.

This is the last of seven episodes to guest star James Lough. He played a different character in each episode. In “Trick or Treatment” he played Private Crotty.

Richard Lineback, who played Private Scala in this episode, previously played Eddie in “Dear Uncle Abdul” during Season 8. John Otrin, the ambulance attendant, later played an ambulance driver in “Goodbye, Farewell and Amen.” And Herman Poppe, who played the M.P. who argued with Colonel Potter about chickens, later made a guest appearance on Trapper John, M.D. in 1983.