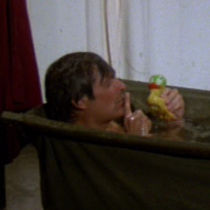 Capsule Summary: In the middle of a heat wave, Hawkeye and B.J. try to hide their new bathtub from the rest of the camp. Meanwhile, Klinger tries to use the heat to get out of the Army.

The A story involving Hawkeye and B.J.’s bathtub is silly but harmless, although reminiscent of “The Long John Flap” back in Season 1. In both episodes, somebody at the 4077th has something everyone else wants. It’s a plot that turned up time and time again on M*A*S*H. .

But why did Hawkeye even need to buy a canvas bathtub? What happened to the swimming pool Henry had built in “The Consultant” during Season 3? Maybe there wasn’t enough water available to fill the pool. There’s yet another bit of continuity confusion involving bathing: in Season 8’s “Life Time” Hawkeye asks Klinger to go get his canvas bathtub despite the fact that it was traded away in this episode.

Poor Hawkeye. By trying to help Radar, he inadvertently spilled the beans about the bathtub to the whole camp–or at least the nurses. Once the secret is out, unfortunately, an already silly story line becomes even sillier. Why would everyone line up to take a 10-minute bath? Why not just make a schedule? And where exactly is all this cold water coming from?

I do love how Charles uses the fight to cut the line and slip into the tub.

Klinger’s B story is solid and perhaps the last of his great Section 8 stunts. There were a handful of others during Season 7 and one or two more in Seasons 8 and 9. Only a few of his stunts throughout M*A*S*H actually came close to succeeding and this was one of them. He was so close: only one more hour and he would have made it.

Radar’s tonsillitis can be considered a C story, although there isn’t much to it and it does fit somewhat into the bathtub A story. Colonel Potter chiding Hawkeye for joking around before and during the surgery is a nice touch. Everyone cared about Radar but the Potter-Radar relationship was deeper than most. 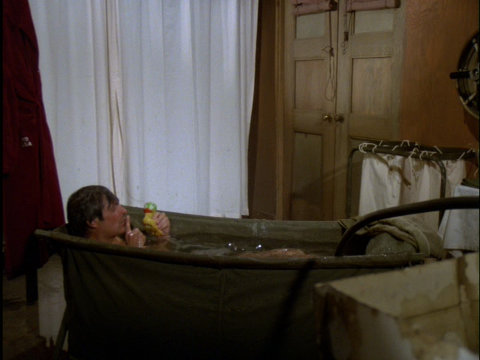 Margaret screaming “I want it!” when she bursts in on Hawkeye, B.J., and Father Mulcahy–and, more importantly, the tub–is ridiculous. Shrill Margaret at her worst.

When Hawkeye, B.J., and Colonel Potter rush over to break up the fight, the edges of the camera lens can be seen in the corners. Perhaps a special wide lens was used for this scene? Or maybe the lens was out of focus.

Ted Gehring, who played Sergeant Rhoden in this episode, earlier guest starred in Season 2’s “The Incubator” as Major Morris. Both characters were scroungers and hoarders.

Back in 2010, someone raised the possibility that Beeson Carroll made an uncredited cameo in “None Like It Hot” as the tall, dark-haired man in line for the tub. All evidence points to it being a random background extra who looks vaguely like Carroll.