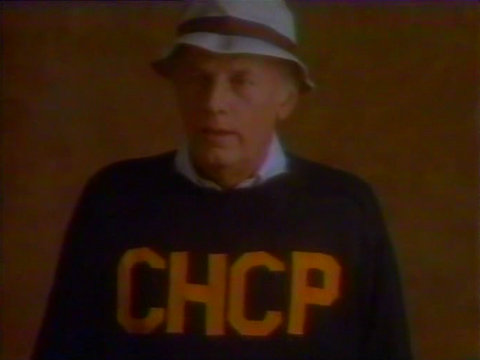 Here’s a very incomplete commercial for Community Health Care Plan (CHCP) featuring McLean Stevenson, from November 1986. CHCP was a health maintenance organization (HMO) based out of New Haven, CT that operated from 1971 to 1996.

I originally posted this commercial fragment back in February 2009 but later took it down for reasons I can no longer remember. I likely assumed it was pointless to have it on the blog because it’s only the first five seconds of a longer commercial that ran 20 or 30 seconds.

Even incomplete, I think it’s an interesting curio for M*A*S*H fans. Notice that McLean is wearing a sweater with CHCP written on it, much like the University of Illinois sweaters Henry Blake often wore on M*A*S*H. His hat is likewise reminiscent of the hat Henry wore, although it doesn’t have any fishing lures on it.

For the record, this commercial was taped from WTXX-TV (Channel 20) in Connecticut.