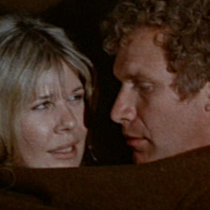 Capsule Summary: The 4077th is being shelled. Colonel Blake and Father Mulcahy are nearly blown up in the latrine while Trapper and Margaret find themselves trapped in the supply room.

There are quite a few impressive–and at times fiery–explosions in this episode. Yet despite all the shelling, none of the tents or buildings appear to be directly hit. According to Radar, during thirty minutes of shelling the 4077th did sustain some damage: a generator was knocked out, the water tank was smashed, and three people were wounded. That’s not too bad considering how intense the bombardment was at times.

It takes a while for this episode to get going but once Trapper and Margaret are trapped in the supply room things start to pick up. Trapper makes his intentions perfectly clear but Margaret, despite being attracted to Trapper (she admits this in “Hot Lips and Empty Arms” during Season 2), refuses to get physical with him.

Nevertheless, Frank becomes incredibly jealous after finding Trapper and Margaret huddled together under a blanket. He even proposes but quickly tries to take it back. He’s so concerned he can’t operate. Hawkeye, in a rare moment of kindness aimed at Frank, assures him that nothing happened between Trapper and Margaret.

Aside from the Trapper/Margaret/Frank storyline, this episode feels really disjointed at times. There are numerous plot points but no other storylines. Maybe that was intentional. The bombing continues because this is war. War doesn’t get wrapped up nicely. Costa Rican Nurse Sanchez reminds viewers that it was the United Nations and not the United States striving to beat back North Korea, even if she otherwise adds nothing to the episode.

I’m not sure what to make of Bob Hope’s USO show, Seoul City Sue’s propaganda broadcast, or Radar reading his mother’s letter. These likewise add nothing to the episode in terms of story but prove once again that life at the 4077th continues no matter what. Even being shelled by their own side won’t stop the doctors and nurses from doing everything they can to save lives.

My favorite line of the episode has to be Margaret’s “Well, if I’m going out, I’m going out with a clean scalp.” 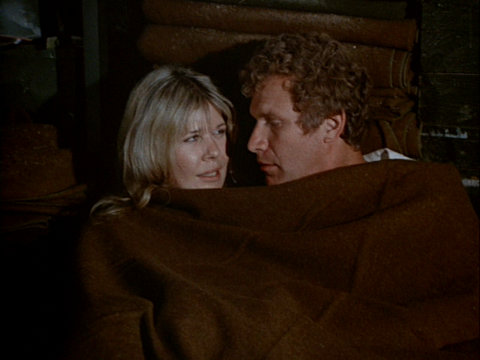 Margaret and Trapper huddle for warmth.

From Seoul in South Korea, it’s been “The Bob Hope Show,” with Marilyn Maxwell, Jerry Colonna, Les Brown and his Band of Renown, and yours truly, Hy Averback.

Does anyone know what Nurse Sanchez is saying at various times in the OR? She’s said to be from Costa Rica so presumably she’s speaking Spanish.

Watch closely as Trapper and Hawkeye are walking out of the supply room. Trapper says “Evacuate to where?” and then we see his lips move but don’t hear anything. Hawkeye then says “Now the book of the month club will never find me.” It’s hard to tell but it doesn’t look like Wayne Rogers is saying “Evacuate to where?”