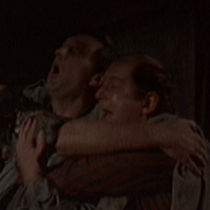 Capsule Summary: Hawkeye and Lt. Bigelow are sent to the 8063rd for a week. Back at the 4077th, B.J. and Charles must contend with an annoying doctor from the 8063rd while Margaret is reunited with an old friend.

Unless I’m mistaken, “Temporary Duty” was as close as M*A*S*H came to an episode without Hawkeye. He appears only briefly at the beginning of the episode then disappears until the tag scene at the end. There’s so much going on that Hawkeye really isn’t missed. That’s the problem with this episode: there’s just too much going on. Both visitors from the 8063rd get their own story line and unfortunately that means neither are able to develop fully. An entire episode about Captain Roy Dupree or an entire episode about Captain Lorraine Anderson would have worked.

I’ll tackle Roy Dupree first because the A Story really is more about him than B.J. and Charles. Does Roy drink too much? Probably. Is he too loud? Definitely. But he’s also a sad character. Lorraine doesn’t seem to like him much. Charles and to a lesser degree B.J. are incredibly rude to his face. Although he jokes about their hurtful comments, is anybody surprised the man drank a lot? He wants to transfer permanently to the 4077th because he feels like it could be his home, which means he most not feel that way about the 8063rd.

Yet when Hawkeye returns, he tells B.J. and Charles that everyone at the 8063rd hated him. They thought he was dull and that the 4077th got the better deal in the temporary transfer. If the 8063rd loved Roy so much, why did he want to transfer to the 4077th? He’s clearly a gifted surgeon, although sadly that aspect of his character was barely touched upon. I think the episode missed an opportunity to reflect on Frank Burns, whose surgical skills were as lacking as his personality. Roy was a good doctor but nobody at the 4077th seemed to care.

The B Story is all about Margaret and not at all about Lorraine, who we learn almost nothing about over the course of the episode. Aside, of course, from the fact that she is the polar opposite of Margaret: happy, fun-loving, flirtatious. Margaret opens up to Lorraine about why she’s so cold and distant. She’s afraid. She’s always been afraid. So she put up walls and kept herself apart from everyone, which means now that her marriage to Donald isn’t going well (“You know what I was thinking the other night? That he’s more like a toy soldier I play with sometime.”) she doesn’t feel like she has any friends at the 4077th or anyone to talk to about her problems. It’s depressing.

Margaret and Roy Dupree are two very different characters with a similiar problem: they can’t connect to anyone. Roy is as outgoing as Margaret is closed-off and yet he apparently feels just as isolated and alone as she does. Why else would he want to leave the 8063rd–where apparently everyone liked him? He can’t stop being friendly and drinking and partying and laughing. Margaret can’t start, although she takes a tentative step forward at the end of the episode.

When Margaret asks if B.J. and Charles want to get a cup of coffee and talk, the two are noticeably surprised and confused. That’s a little unbelievable because Charles made attempts to befriend Margaret earlier in the season and the two must have some sort of relationship outside of the operating room. And B.J. is such a nice guy. Hopefully when Roy gets back to the 8063rd he’ll realize that he has friends there and can make it the home he hoped the 4077th would be.

Radar, Klinger, Father Mulcahy, and Colonel Potter contribute very little to the episode. Potter’s reaction to Roy riding around the camp on Sophie is amusing: “Come on, Soph. You can step on his hat if you want to.” 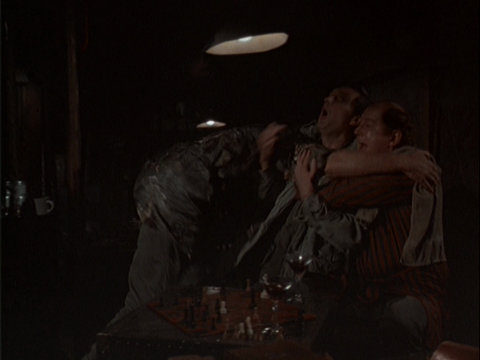 The timeline in this episode doesn’t make much sense. Colonel Potter tells Hawkeye and Bigelow they’ll be at the 8063rd for a week. The two leave and an hour later Roy and Lorraine arrive at the 4077th. Everyone is introduced. Then casualties arrive. Margaret and Lorraine have an argument after surgery. That’s all the same day.

The next scene takes place in the mess tent and it’s implied Roy is tasting 4077th food for the first time. Roy asks Colonel Potter for a permanent transfer and later drunkenly returns to the Swamp after discovering Rosie’s bar, presumably that night. Charles and B.J. hatch a plan to turn Potter against Roy, which works. The next morning, Roy is severely hungover and leaves alongside Lorraine. Either Potter sent the two back to the 8063rd early or somehow a week passed without anyone noticing.

Charles finally adds Boston to the signpost in this episode.

Margaret tells Lorraine she supervises 10 nurses at the 4077th. In some episodes, we only see one or two. In others, it seems like they are dozens.

Although Charles is clearly interested in Lorraine, apparently she was just flirting with him to pass the time. When she calls him “one of a kind” he’s taken aback, unsure whether it’s a complim ent or an insult. It feels like he eventually decides it’s somewhat insulting.

Speaking of Charles, why is he carrying a big sharpened stick while watching Roy riding Sophie? If he removed it while helping Roy “steal” Sophie, why didn’t Colonel Potter notice?