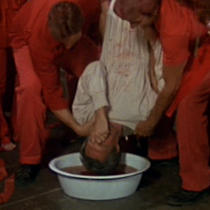 Capsule Summary: Furious that peace talks have broken down, Hawkeye takes matters into his own hands and takes a trip to Panmunjom. Meanwhile, Margaret decides to divorce Donald after he requests a permanent transfer to San Francisco.

Neither of the storylines in this episode are particular strong. Hawkeye’s A story is just too unbelievable to be taken seriously while Margaret’s B story feels rushed and undeveloped. I think Margaret’s decision to get a divorce should have been either an A story or a more substantial B story.

We can all understand Hawkeye’s frustration upon learning that the Army has altered its point system for rotating personnel home and he won’t be heading back to Crabapple Cove anytime soon. Equally understandable is his anger at the lack of progress in the peace talks. But that doesn’t make it easy to accept how Hawkeye can just stroll into the peace talks and start ranting.

M*A*S*H often–but not always–went to great lengths to remain realistic. In this case, I just can’t willingly suspend my disbelief to accept Hawkeye even finding the peace talks, let alone getting into them.

Like Hawkeye’s rage against the military, Margaret learning that Donald requested a permanent assignment to San Fransisco and storming out of Radar’s office is understandable. I’m willing to accept that her rage allowed her to kick down the door on her way out. I’m willing to accept she’d fall apart outside in front of everyone rather than hold everything together until she could fall apart in private. It’s painful to listen to her blame herself: “Look at the place I picked to have a marriage!”

I don’t like the way she runs to Colonel Potter for reassurance that she’s doing the right thing by deciding to divorce Donald. She seems childish in this scene rather than confused and conflicted. By the end of the episode she’s confident again, almost cheerful. It all happens too fast. Maybe that’s realistic for someone realizing their marriage is over but not wanting to fully accept it and then–finally–accepting it.

The red dye party may seem silly but according to Ken Levine, who co-wrote the episode, it “stemmed from an actual incident we found in the research.”

Fans who feel Hawkeye grew increasingly self-righteous over the course of the series probably love hearing Charles call him “Benjamin ‘Holier-Than-Thou’ Pierce” in the OR. Personally, I’m more of a fan of the Charles/Hawkeye exchange during the red dye party that includes the following line:

Charles: “Pierce, I have never said this about anyone but myself. You are a great human being.”

However, it seems a little out of character for Charles to not only participate in the party but also get so drunk that he actually compliments Hawkeye.

Hawkeye is about to get dunked.

“Peace on Us” was the first episode produced for Season 7 but aired second after “Commander Pierce” (which was produced fourth). It rarely mattered if episodes weren’t aired in the order they were produced but there is a continuity issue involved here. Viewers watching back in 1977 would’ve seen B.J. with a mustache in “Commander Pierce” and then watch him grow the mustache the following week in “Peace on Us.”

It’s hard to tell but at least a few of the extras in the background during the party in the Mess Tent don’t seem to have red hair. I’m pretty sure regular extras Roy Goldman and Gwen Farrell are in the scene. Maybe Dennis Troy.

In TV’s M*A*S*H: The Ultimate Guide Book by Ed Solomonson and Mark O’Neill, Kevin Hagen reveals that some or all of his scene at the red dye party was reshot because his “natural red hair did not look natural” compared to all of the dyed hair. Apparently Postal paint was finally added to his hair to make it look more natural.

Where is Klinger in this episode? He’s in the very first scene, smoking a cigar and worrying about the sun ruining his hair. Then he disappears until the final scene, answering roll call. He’s not at the red dye party. Also, watch closely and it looks like Jamie Farr wasn’t filmed answering roll call with everyone else. When the crowd disperses, Klinger is nowhere to be seen.

16 Replies to “Episode Spotlight: Peace On Us”