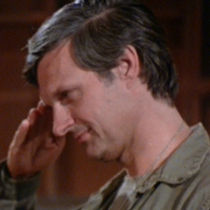 Capsule Summary: After pushing Radar to take a trip to Seoul, Hawkeye is distraught when Radar is wounded on the way. Radar later criticizes Hawkeye for being hungover during surgery, so Hawkeye yells at him, then feels guilty about it.

This is a polarizing episode. There are those fans who consider it a “classic” M*A*S*H episode. Others think it’s overly dramatic and preachy. Personally, while I don’t hate it, I think it’s a very flawed episode.

For one thing, I don’t find it believable that Radar idolized Hawkeye to such a degree that he would react so strongly to Hawkeye having to step out of surgery to throw up. Radar definitely looked up to Hawkeye, may have considered him something of a role model, but did he put Hawkeye on a pedestal? It’s too naive and childish even for the innocent Radar from the middle years of M*A*S*H (as opposed to the more adult Radar from the first three seasons).

Much more problematic is Hawkeye being too drunk to operate. It’s something that should have happened all the time, to many of the characters, considering how much they drank and how often. But it didn’t. Despite the fact that wounded could arrive at any moment, Hawkeye and Trapper and Henry and B.J. and others drank whenever they wanted. Until “Fallen Idol” it was never a problem.

(In Season 3’s “The Consultant,” Dr. Borelli was too drunk to operate but he knew he had to be in surgery and chose to get drunk because he couldn’t handle the stress of a MASH unit.)

According to Michael Hirsh (producer of the 1981 documentary “Making M*A*S*H”), Alan Alda wrote “Fallen Idol” because he always wondered what would happen if casualties arrived while one of the doctors was drunk. Here’s what Hirsh posted to the alt.tv.mash newsgroup in April 1997:

Jonathan Robbins write: “This actually leads me to a question I’ve always had: the MASH unit was never sure when casualties would arrive in camp. They could come at any time. And yet, quite often, all the doctors would be on drinking binges at the same time. What would happen if a load of wounded arrived while everyone was loaded at Rosie’s Bar? Weren’t they all endangering patients every single time they got drunk?”

I think there are too [sic] answers to this:

#1 — The drinking and then going into surgery without prior notice was a cheat for television. In the “real” Army/war, it’s unlikely that sort of thing would happen on a regular basis.

#2 — Early in the sixth season, which was just after the departure of Gene Reynolds, Alan Alda wrote and directed an episode titled “Fallen Idol.” It’s where Hawkeye is too drunk or hung over to operate, and when Radar nails him for it, Hawkeye gets PO’d at Radar. Alan said that this particular episode was his answer to the observation Jonathan makes. He, too, had always wondered about it, and he put his musings into “Fallen Idol.” The episode won the comedy writing Emmy for that season.

As a standalone, one-off story about a doctor whose too hungover to make it through surgery, “Fallen Idol” works well enough. Doctors probably shouldn’t drink too much if they don’t know when they’ll be called upon to save lives. But after five seasons of drinking and hangovers without serious repercussions, an episode like this feels wrong. Within the M*A*S*H universe, the doctors could drink themselves silly and never endanger patients. That’s just how it was.

Then “Fallen Idol” comes along and suddenly its not okay for Hawkeye to stay up late drinking and suddenly he can’t just shake off his hangover and operate skillfully. Later episodes like “Period of Adjustment” and “Bottoms Up” dealt with alcohol more seriously than the early seasons, but I can’t recall another instance in which one of the doctors was too drunk to operate. That makes “Fallen Idol” really stand out. It’s too bad, because it is a story worth telling, just one that doesn’t fit within the world of M*A*S*H. But maybe that’s just me.

There’s a lot of yelling in this episode and a lot of angry speeches. Some of them are better than others. Hawkeye blowing up at Radar feels out of character but I actually like what he says. He didn’t ask for Radar (and potentially others at the 4077th) to consider him above reproach. He’s human. He makes mistakes. I also like Radar telling Hawkeye to go to hell. I don’t like Father Mulcahy, Colonel Potter, and Margaret storming into the Swamp to berate Hawkeye. For one thing, it’s repetitive. And just how did they all hear so quickly that Hawkeye yelled at Radar? I’m surprised Klinger didn’t show up and start hitting Hawkeye with one of his handbags.

Charles doesn’t make much of an impact. It’s too bad this episode didn’t take place while Frank was around. I bet his reaction to Radar being wounded and Hawkeye being hungover in the OR and the ensuing yelling would’ve been hilarious. 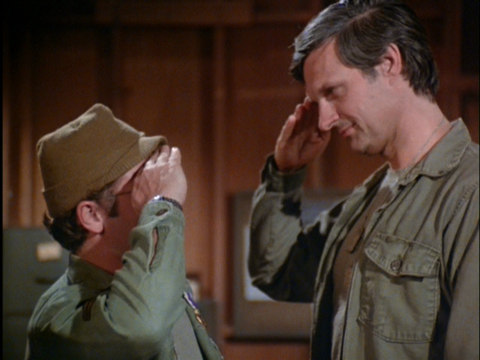 A rare serious salute from Hawkeye.

How come nobody else reacts when Hawkeye yells “B.J., it’s Radar!” in pre-op? Nurse Kellye is standing right there and doesn’t seem bothered at all to see Radar laid out on a gurney.

Why is Colonel Potter confused about what Radar was doing out in a jeep? Unless Radar forged a pass to Seoul and stole the jeep, shouldn’t Colonel Potter have known what was going on?

Radar digs out his Purple Heart while packing up in “Good-Bye, Radar (Part 2)” and mentions how Hawkeye saluted him. He tells Klinger, “Hawkeye’s never saluted anybody!”

Hawkeye calls Radar “Andy” at the beginning of the episode (“What’s the trouble, Andy?”) which I believe is a reference to the Andy Hardy movies starring Mickey Rooney.

On a very shallow note, I don’t blame Radar for standing around talking to himself after seeing a pretty nurse wearing just a towel.