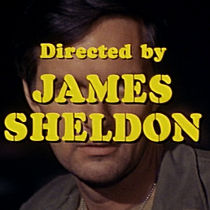 Director James Sheldon, whose television career spanned four decades, passed away on March 12th at the age of 94. He direct two episodes of M*A*S*H: “Edwina” during Season 1 and “B.J. Papa San” during Season 7.

According to the Internet Movie Database, Sheldon directed episodes of more than 100 different TV shows ranging from Mister Peepers and Schlitz Playhouse in the 1950s to The Dukes of Hazzard and Whiz Kids in the 1980s. His last credit is for an October 1986 episode of Sledge Hammer!

Other shows Sheldon directed include The Twilight Zone, Naked City, The Millionaire, The Bing Crosby Show, The Fugitive, My Three Sons, That Girl, Room 222, Sanford and Son, The Waltons, and Seven Brides for Seven Brothers.

In 2005, Sheldon sat down for an interview with the Archive of American Television. The interview can be found here. He briefly discusses M*A*S*H. He knew Gene Reynolds when the latter was an actor. Reynolds then became a director and a producer and hired Sheldon to work on a couple of episodes of M*A*S*H during the show’s first season.

In 1972, Sheldon was under contract to 20th Century Fox and was scheduled to direct an episode of Anna and the King, which aired prior to M*A*S*H on Sundays on CBS during the fall of 1972. But he was moved over to M*A*S*H instead, likely due to Anna and the King being cancelled. The show was a flop and only ran for 13 weeks. Sheldon did direct one episode, which meant he got to work with Yul Brenner.

The episode of M*A*S*H Sheldon directed was “Edwina,” which aired on December 24th, 1972. Sheldon thought the scripts for M*A*S*H were “very funny” but apparently didn’t like how Alan Alda and Wayne Rogers “were fighting” so he didn’t work on any other episodes at that time. He admits he should have been “wiser” about directing additional episodes because the series proved so successful in syndication and continued to send him royalty checks unlike Anna and the King.

Obituaries for James Sheldon be found at The New York Times and The Hollywood Reporter.