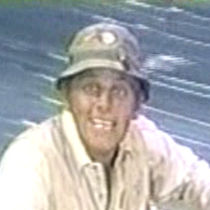 For at least 15 years, M*A*S*H fans have wondered about the existence of a bit of TV footage in which McLean Stevenson sat on a raft and shouted “I’m okay! I’m okay!” Supposedly, it aired at the start of an episode of The Carol Burnett Show the day after “Abyssinia, Henry” was originally broadcast back in March 1975. Or so one version of the story goes. Other versions claim it was an episode of Tony Orlando & Dawn or The Tonight Show Starring Johnny Carson.

I looked into the rumor back in June 2011 and was only able to determine that if it was The Carol Burnett Show it couldn’t have aired the day after “Abyssinia, Henry” because The Carol Burnett Show was seen on Saturdays while M*A*S*H aired on Tuesdays during the 1974-1975 season. Truthfully, I wasn’t convinced it ever really happened.

Well, it did. Only not on The Carol Burnett Show and definitely not the day after “Abyssinia, Henry” aired. See for yourself:

So when did this footage air? During the Sunday, May 4th, 1975 episode of Cher’s CBS variety show, which was called Cher. McLean Stevenson was the special guest that week. In addition to his brief raft appearance, he was also in two full sketches.

(After I wrote about McLean Stevenson and The Carol Burnett Show, a number of people left comments saying they remembered the footage, including two who claimed it was from an episode of Cher. They were right.)

If you’re curious how I got my hands on this footage, here’s what happened. A few weeks ago, I received an e-mail from someone saying they had the episode of Cher on DVD. Apparently, the series aired on VH-1 at some point during the 1990s (originally an hour long, the VH-1 episodes are cut down to 30 minutes). He offered to send me a copy. I eagerly accepted but was torn. On the one hand, I was excited to finally see the footage. On the other hand, it seemed too good to be true. Could this really be it?

At first, after watching the episode in question, I couldn’t find the footage of McLean Stevenson on a raft. He was definitely in the episode, part of a bizarre sketch involving mice. I took a closer look and there it was. The timing was perfect. The 41st anniversary of “Abyssinia, Henry” was only days away. What better time to post the video and finally confirm once and for all that it really happened?

Let’s all say a big thank you to the M*A*S*H and Cher fan who provided the DVD.