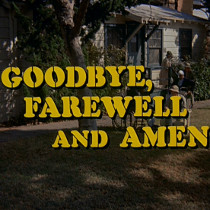 Today marks the 33rd anniversary of the original CBS broadcast of “Goodbye, Farewell and Amen” back in 1983. An estimated 105.9 million viewers tuned in for that that historic broadcast on Monday, February 28th, 1983. It remains the single highest-rated television broadcast of all time in the United States.

The past year has been a pretty big one for the M*A*S*H series finale. On May 3rd, 2015 classic TV diginet MeTV aired a special presentation of the final episode featuring exclusive interviews with members of the cast and the show’s creative team, including Alan Alda, Jamie Farr, Wayne Rogers, Gene Reynolds, and Ken Levine. Also, on July 1st the finale was added to Netflix in the United States (and other countries).

Earlier this month, Super Bowl 50 was watched by 111.86 million viewers, pushing “Goodbye, Farewell and Amen” to eighth on the list of most-watched TV broadcasts in U.S. history.

It’s been almost a decade since I last watched “Goodbye, Farewell and Amen.” I know I’ll be watching it at some point in the next year or so, depending on when it gets chosen for an Episode Spotlight review.

Hit the comments with your memories of the first time you saw the finale. Were you watching on CBS in 1983? Did you buy it on VHS in the 1980s? Did you have to wait until it aired in syndication in 1993? Is there anyone who hasn’t seen it?

5 Replies to “33rd Anniversary of Goodbye, Farewell and Amen”