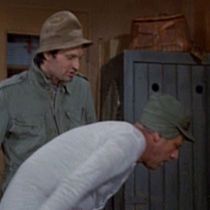 “The Longjohn Flap” aired just two weeks after “Sometimes You Hear the Bullet” and was so very different in tone that I wonder if viewers in 1973 thought they were watching a different show. I doubt it, because at that point “Sometimes You Hear the Bullet” was really somewhat of an outlier. M*A*S*H was for more slapstick than serious during its first few years on the air.

I love the opening scene. We immediately understand that it is freezing cold at the 4077th and we feel sorry for Radar having to do paperwork only to then see him stuff them into a stove. Our expectations are defied, hilariously.

Hawkeye can be so cruel, flaunting his warm longjohns in front of Trapper and later basically taunting him for being cold and sick. And yet, after a few fake sneezes, Hawkeye gave his bunkmate the longjohns hoping they would keep him warm and help him recover his health. How believable is that?

There’s no way to reconcile the version of Radar seen with the way the character was depicted in later seasons. First he uses the longjohns to score a date with Nurse Beddoes–and she makes it very clear how far she’ll go to get her hands on them. Then he decides to trade the longjohns for a leg of lamb the cook just so happens to have ready to go. In “Private Charles Lamb,” of course, Radar went to great lengths to save a lamb destined for dinner.

It’s also difficult to believe Klinger would get away with sticking a rifle in Frank’s face and trying to rob him. Frank insulted him but apparently did not bring him up on charges. Exactly how Klinger could stand to be on guard duty wearing a dress is never explained, although perhaps his Lebanese blood kept him warm.

Finally, if Henry was so sick that he was throwing up, had a fever, and his appendix was potentially moments away from bursting, how exactly was he able to hide his condition from the other doctors? 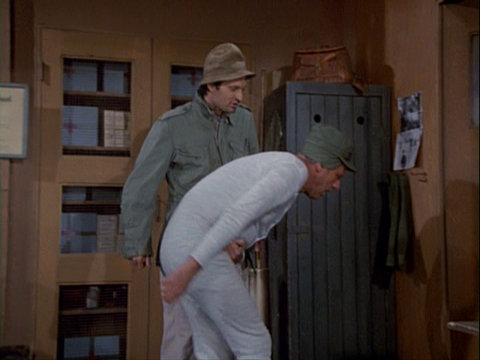 The lack of winter clothing suggests this was the first winter in Korea for the 4077th. Otherwise wouldn’t at least some warm clothing be laying around?

Hawkeye, Trapper, Frank, and Henry are all seen wearing the longjohns. Who looked better? Father Mulcahy also wore them but we never saw him in them. Only Margaret and Klinger never wore them.

This was the first episode of M*A*S*H to be written by a member of the cast. It was also the first of 19 episodes written or co-written by Alan Alda.

If it’s so cold why are Hawkeye and Trapper the only ones in the Mess Tent with blankets wrapped around them? And how does the cook stay so warm?

The way Henry says “abdomen” is interesting. He pronounces it “ab-doe-men” rather than “ab-da-min” the way Trapper does. Something in the script or just the way McLean Stevenson talks?

There are those who believe Margaret was waiting for the longjohns to dry after washing them when Klinger stole them. That would explain why she didn’t put them on immediately. I’m not so sure. I think she was trying to get warm enough by the stove to undress so she could slip into the longjohns.