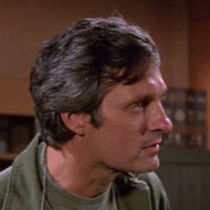 Capsule Summary: While Charles deals with a bad back, a furious Hawkeye sends the Army a huge bill for his medical services.

Leave it to Hawkeye to blow a relatively harmless magazine article into a huge fuss and nearly get himself sent to the funny farm. Exactly why Colonel Potter was so worried that Hawkeye was going to wind up in the loony bin is never explained. If anything, he should have been more concerned that Hawkeye would face a court martial.

Considering that B.J. had money woes on occasion, I would have expected him to be a little more upset upon hearing that doctors stateside were making huge amounts of money. He seemed to think it was funny at first and even after stealing Captain Snyder’s jeep was clearly not as angry as Hawkeye.

Richard Herd does a terrific job as Captain Snyder and it helps Hawkeye’s A story immensely to have such a solid antagonist. He’s not just a mindless bureaucrat. Snyder truly detests Hawkeye.

The Charles B story is amusing but nothing special, although there are two parts I like: Charles describing the wonder of the human body and his honest gratitude after being cured by the South Koreans. Margaret’s role in the episode was pointless. She really had nothing to do and seeing her treat Charles like a child was embarrassing. 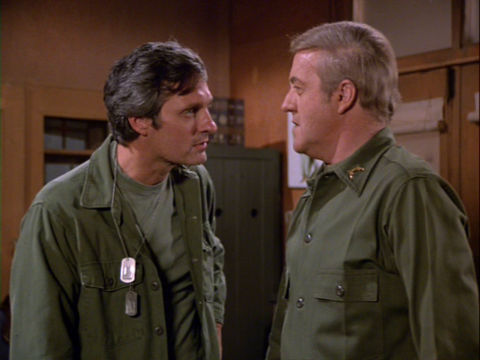 Hawkeye wants the Army to pay up.

The first scene in the scrub room looks incredibly grainy on DVD and when streamed via Netflix.

B.J. pours an entire shaker of sugar (or salt) into a bowl after giving up on breakfast. I wonder why.

Were doctors actually able to take x-rays in the United States rather than get drafted and sent to Korea?

17 Replies to “Episode Spotlight: Back Pay”