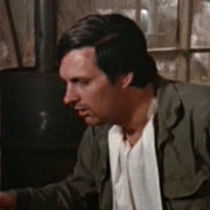 Capsule Summary: Fed up with liver and fish, Hawkeye goes to extreme lengths to get a shipment of ribs from Chicago delivered to the 4077th.

“Adam’s Ribs” is unquestionably a classic. It includes an iconic rant from Hawkeye and has led countless fans (and probably some casual viewers) to wonder whether there was or is a real restaurant in Chicago called Adam’s Ribs. More on that later.

Hawkeye’s “a river of liver and an ocean of fish” rant is easily one of the most famous lines from all of M*A*S*H, a superb piece of writing flawlessly delivered by Alan Alda. My favorite part of the scene is either Hawkeye’s little dance or him climbing the tent pole.

Is it plausible that Hawkeye would be able to set in motion just the right chain of events to actually get ribs shipped from Chicago to Korea? Not really, no. Is it even possible that the ribs would still be edible after arriving at the 4077th? I doubt it. In an episode like this, none of that matters.

In my opinion, one of the big reasons that this episode works so well is the absence of Frank and Margaret (and Father Mulcahy, for that matter). Although it’s likely one or more of these characters could have added something amusing, them not being in the episode gave Hawkeye so much more time to shine.

The end of the episode is somewhat depressing. One certainly hopes that Hawkeye was able to return to his ribs after surgery but even if he did they would be cold. It reminds me of the ending to the iconic “Time Enough at Last” episode of The Twilight Zone. 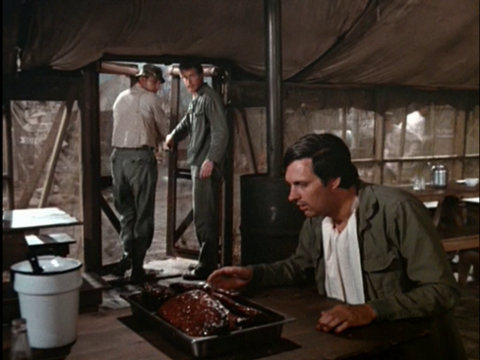 There was no restaurant called Adam’s Ribs in Chicago around the time of the Korean War. Nor did scriptwriter Laurence Marks or executive producer Larry Gelbart base the fictional Adam’s Ribs on a real restaurant. According to a June 1996 post to the alt.tv.mash newsgroup, Gelbart came up with the name because he was from Chicago and his newborn son was coincidentally named Adam.

The Chicago Sun-Times published an article examining the history of the non-existent restaurant in April 2009 (an archived version is available here). In it, Gelbart discusses the genesis of the fictional restaurant. “Part of it had to do with the city’s ‘hog butcher for the world’ reputation but it principally was just a conceit, a loving homage, to a place that I can never forget.”

A cultural historian for the Chicago Department of Cultural Affairs explains in the article that anyone intimately familiar with Chicago would know that Adam’s Ribs as described in the episode couldn’t exist. That hasn’t stopped fans from trying to find it, however.

If Henry knew Chicago and Dearborn Station so well, why wasn’t there someone he could call to pick up the ribs? Assuming, of course, that he wanted to help Hawkeye.

Hawkeye refers to himself as Cranston Lamont while talking to Bernard Reznik at Dearborn Station. Lamont Cranston is the alter ego of the crime fighting protagonist of The Shadow radio show.