An episode in which the gang gets a letter from Radar could have been great. “The Foresight Saga” wasn’t, unfortunately, in large part because there was so much going on. There were four distinct plot lines in this episode: Radar’s letter (A story), Colonel Potter’s glasses (B story), Park Sung (C story), and Margaret’s eye problems (D story). That’s a lot to pack into 23 minutes which is about how long this episode runs, not counting the opening and closing credits.

There was no need for Colonel Potter and Margaret to both have their own plot lines, especially when both were so boring and, in the case of Colonel Potter’s glasses, silly. In fact, there was no reason either of them needed one. Cutting them out would have allowed much more time to be devoted to the A and B plot lines. I’m not sure that would have helped with the Park Sung plot line but it definitely could have helped flesh out the A story. Given how beloved Radar was, I think most viewers would have liked to learn more about his life back in Ottumwa rather than watch Margaret pretend to flirt with Dr. Herzog.

Unfortunately, expanding the A story may not have helped. It was heartbreaking to learn that Radar’s family farm was failing and that he was forced to take a second job at the general store to pay the mortgage. After everything he went through (losing Colonel Blake, getting wounded, and going home only because his Uncle Ed died) it would have been nice for him to actually get a happy ending. That doesn’t mean the farm had to become “a great big success” and Radar turn into a “tycoon in the making.”

It’s even worse that the farm failing was so obviously contrived just to give B.J. and the others the idea to send Park Sung to the States to help. That’s just a little too reminiscent of the plan in “M*A*S*H — The Pilot” to send Ho-Jon to school in the United States.

If the writers really wanted Radar to be in trouble back in Ottuma, perhaps to make the point that life after returning from war wasn’t always happy and successful, it would have worked far better had it been the only plot line in the episode (perhaps with a minor B story). Rather than force a happy ending, the gang at the 4077th could have spent the entire episode frustrated at the fact that there was absolutely nothing they could do to help other than send a little money. 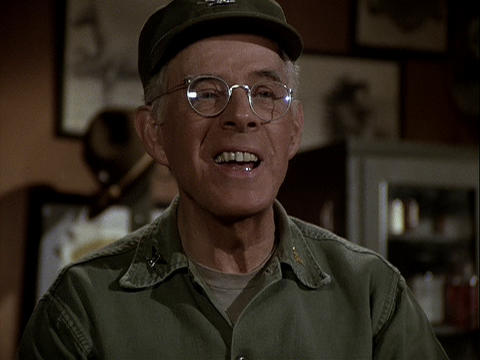 Charles was in top form in this episode with some great lines, including “Well, he certainly hasn’t lost his savage wit” and “Actually, you know, I never thought I’d miss old Radar. I was right, of course.” Plus there was his initial refusal to allow Park Sung to stay in the Swamp, only to reconsider at the thought of having a house boy. Still, he offered to lend Radar some money which was a little surprising. Also, notice that he’s the only one not singing “He’s a Jolly Good Fellow” to Park Sung in the Mess Tent. He doesn’t even clap.

Colonel Potter mistaking Radar’s mother for Radar on the phone is either coincidence or a reference to the fact that Gary Burghoff played Radar’s mother in a home movie shown in “Mail Call Again” during Season 4.

I can’t recall off the top of my head whether Radar/Walter talked about the farm in his appearance(s) on AfterMASH but in the unsold 1984 CBS pilot “W*A*L*T*E*R,” he revealed that he lost the farm after refusing to accept government subsidies.

I can’t imagine a coleslaw cake tasting very good regardless of how good the coleslaw is.