Capsule Summary: Disturbed by a high bar tab, Hawkeye decides to give up drinking for a week. Charles, meanwhile, is infuriated to learn that his sister is engaged to an Italian.

My main criticism of this episode is that characters are too over-the-top. I don’t know if it’s overacting or what but Hawkeye and Charles especially come off as exaggerated caricatures throughout the episode. B.J. does as well but to a lesser extent. And because Hawkeye and Charles each had a storyline, that meant a lot of hysterical arguing and overblown yelling.

With Hawkeye’s sobriety A story there is at least the understanding that he wasn’t acting like himself and that he was dealing with at least some of the symptoms of alcohol withdrawal. There’s no excuse or explanation for Charles acting so hysterical other than a need to emphasize the emotion and turmoil of his telegram to Honoria at the end of the episode.

With few exceptions (this episode, “Alcoholics Unanimous” in Season 3, and later “Bottoms Up” in Season 9), M*A*S*H never really explored the impact of constant alcohol consumption on an surgical unit. Glossed over for the most part was the fact that none of the characters should have been drinking as often and heavily as they were because they could be called into surgery at any moment.

It’s questionable just how much of an alcoholic Hawkeye was supposed to be and thus how severe his withdrawal should have been. For the most part he just seemed overly excitable and energetic (and annoying). I’m not a drinker and I don’t personally know anyone who struggles with alcoholism, so I don’t know how realistic Hawkeye’s behavior is. The one thing that rang false for me was his vastly improved sense of smell. Forget for a moment that a sober Hawkeye probably wouldn’t have had any interest in examining the noxious odors of the oft-maligned mess hall. Does alcohol really significantly dull one’s sense of smell?

Charles being a bigot wasn’t the issue with his B story. That fit with his character and background. Nor was it his urgent desire to get in touch with Honoria to try to talk her out of marrying an Italian. It wasn’t so much his basic reaction to the news but his unrealistic behavior afterwards that bothered me: running round in his nightgown, screaming at the top of his lungs, flailing his arms in the air hysterically, his face turning a particular shade of umber.

It’s a credit to the talent of David Ogden Stiers that despite all this, Charles never quite comes across as hammy, although he certainly straddles the line at times. It’s also worth noting that Hawkeye and B.J. aren’t too involved in confronting the bigot that is Winchester, C.E. Three. That’s left to Klinger, Colonel Potter, and Father Mulcahy. 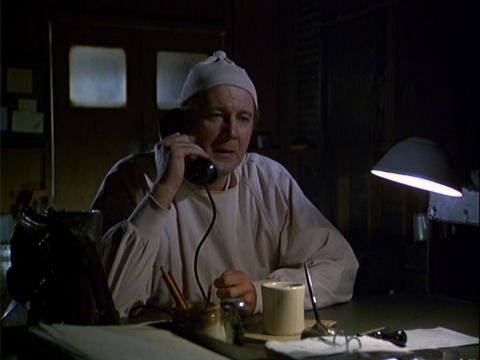 Charles apologizes to Honoria for his narrowness of mind

Is Charles the only character other than Radar and Klinger who is seen talking to Sparky?

Notice that none of the characters have any blood on their surgical gowns when they walk into the Officer’s Club. Their latest sting in surgery couldn’t have been that rough.

Hawkeye’s singing when he walked into the Swamp after showering was not half bad but his rendition of “Hush, Little Baby” wasn’t that great. Chalk it up to fear for his life.

Charles calling bourbon “the Grape Nehi of alcoholic beverages” was a nice callback to Radar’s drink of choice.