Neither of the storylines in this episode are all that strong but both work well enough. In my opinion, the A-story is Major Reddish’s attempt to convince Lt. Chong-Wa Park to accept the $100,000 reward and travel to the United States. That means Charles falling in love with the sophisticated Martine LeClerc only to discover she’s actually very Bohemian is the B-story.

Initially, while rewatching the episode, I couldn’t take the A-story seriously. It just seemed too over-the-top to be in any way realistic. But it turns out there really was a United States Air Force plot during the Korean War to entice Communist pilots to defect with their MiG-15 aircraft. It was called Operation Moolah. You can read more about it at Wikipedia.

Major Reddish never refers to Operation Moolah by name but the details fit. It was on April 27th, 1953 by General Mark Clark and offered $50,000 to any Communist pilot landing a Soviet MiG-15 in South Korea, with an additional $50,000 would go to the first pilot to do so. None did. “Foreign Affairs” probably takes place in May 1953, at least a few weeks after Operation Moolah as announced, and only a few months before the Korean Armistice Agreement was signed, ending the war.

I think the problem with the A-story is not the plot itself but the way Major Reddish was portrayed. He’s just too smug. And he smiles too much. It doesn’t help that I’m a huge Arrested Development fan and I can’t watch actor Jeffrey Tambor without seeing his character(s) from that series.

As for the B-story, once you recall that Boston hasn’t always been considered one of the most liberal cities in the United States, it is at least somewhat understandable that Charles would react the way he did after learning that Martine once posed nude for a painting and lived with a man who wasn’t her husband for several years. Family means everything to Charles and he believed that they would never accept Martine.

It’s debatable whether Charles felt the same way or just said he did to avoid having to interact with Martine. His final conversation with Martine in the Swamp strongly suggests he was at the very least conflicted about his feelings for her. Their relationship could have continued in South Korea or Japan but it could never have gone anywhere once the war ended.

Perhaps Charles wanted to avoid the pain of growing even closer to Martine, so he decided to end things and his family being “very conventional” was the perfect excuse. Or maybe I’m really over-thinking things. 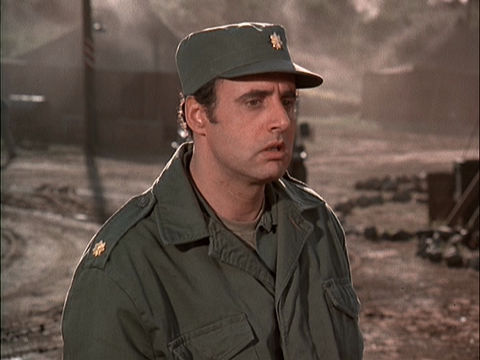 Like several other Season 11 episodes, “Foreign Affairs” was actually produced during Season 10 but held over until Season 11. The “freeze frame” music after the tag is likewise jazzier than usual.

The opening credits are shortened and feature a jazzy, almost bombastic version of the theme song. I’m not a big fan.

This episode marked the fifth and final guest appearance by Soon-Tek Oh on M*A*S*H, all as different characters. He previously appeared in “Love and Marriage” (Season 3), “The Bus” (Season 4), “The Korean Surgeon” (Season 5), and “The Yalu Brick Road” (Season 8).

The end credits include a credit for Patrick Romano as French Soldier. At the very beginning of the episode, during triage in the compound, Colonel Potter checks a wounded soldier who speaks French. A corpsman explains that a French unit got mortared. Unless I’m mistaken, we never see this soldier again. I’m curious if there was a larger role for this soldier that got cut.

Klinger and Father Mulcahy have very small roles in this episode. Margaret’s is only slightly larger.