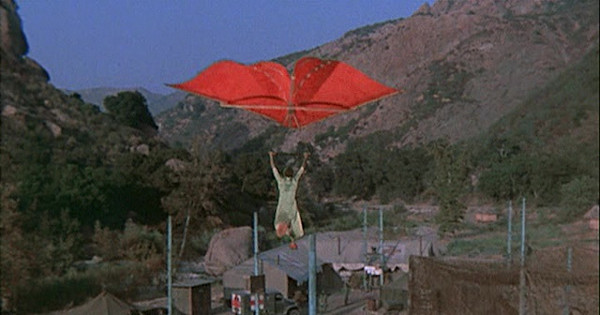 Capsule Summary: Colonel Blake is brought up on charges courtesy of Majors Burns and Houlihan, so Hawkeye and Trapper must come to his rescue.

This was the first and only episode of M*A*S*H to be written by McLean Stevenson. He had contributed the story for “The Army-Navy Game” during Season One but the script for that episode was written by Sid Dorfman. It is also the only episode of any television show ever written by Stevenson. I’m sure he was able to turn to some of the talented scriptwriters who worked on the series for advice and input. His script was also no doubt refined, like any other, before it eventually hit the air.

It’s a great episode. Stevenson had a real feel for not only his character but all the characters. Like the numerous letter home episodes, “The Trial of Henry Blake” takes snapshots of the 4077th and weaves them into a single storyline. The highlight of the episode is without a doubt Klinger’s attempt to escape the camp using a hang glider, resulting in the sightings of a big red bird with fuzzy pink feet.

Larry Gelbart, in a June 1999 post to the alt.tv.mash newsgroup, admitted that he wasn’t fond of that particular escape attempt:

That was the most ambitious special effect tried in the first four years. I know people like it, but I always felt it was so obviously what it was, it departed from the realism we always tried for.

I can’t think of any similar special effects used after Gelbart left M*A*S*H. He does have a point, though. It is obvious that Klinger wasn’t really flying off. Still, it’s a hilarious scene. I do wonder why Hawkeye and Trapper were in such close proximity to one another with their respective nurses. Notice that the quality of the film during the flying sequences is pretty rough, suggesting that when the episode was remastered for DVD those sequences couldn’t be cleaned up for some reason.

My second favorite part of the episode is Frank telling Igor to only paint the top half of the rocks and to turn them over every night. Third would be the entire Kentucky Derby gurney race scene.

Radar going with Colonel Blake to regimental headquarters makes no sense. He should have had a lawyer of some sort not a company clerk. Radar wasn’t much help at all, even ignoring the two continually bumping heads. Radar had to be there so he could head back to the 4077th and inform Hawkeye and Trapper of Henry’s arrest while stress eating. It’s also hard to believe that Radar wouldn’t have told Hawkeye what was going on before leaving for HQ, even if Blake had ordered him not to.

Meg Cratty would return in “The Kids” during Season Four, this time played by Ann Doran.

On the topic of General Mitchell, I find it hard to believe he wouldn’t know what a gurney was.

In at least two scenes you can see a patient on crutches in the background. There’s also a patient in a wheelchair. Little things like this really help make the 4077th feel like a bustling camp.

13 Replies to “Episode Spotlight: The Trial of Henry Blake”