Capsule Summary: Hawkeye and Trapper meet a civilian military consultant who later visits the 4077th and suggests a radical surgery to save a soldier’s leg.

I think the best thing about this episode is Henry’s pool. It seems both totally random yet also quit fitting for Henry to have a giant pool and for Radar to be filling it with hot water. I just love that all he wants to do is soak in his pool and get nice and wrinkled. But he’s bothered first by Frank and later by Hawkeye and Trapper.

I would love to know more about how this scene was rehearsed and shot. Did director Gene Reynolds tell McLean Stevenson to blow a raspberry after Frank walked off or to splash Hawkeye? Was Alan Alda instructed to scream in a particular way when he jumped into the pool or did he improvise it on the spot? I wonder if the actors enjoyed the pool nearly as much as the characters seemed to or if for them it was a tedious and wet scene to shoot.

That said, this was really a Hawkeye episode. Henry’s pool is just a minor subplot. It was more than a little hypocritical of Hawkeye to hold Dr. Borelli to such a high standard when he himself drank all the time, as Borelli pointed out. The doctors didn’t have office hours. At any moment they could have been called into surgery. Furthermore, Borelli was a civilian. He wasn’t used to the shelling and the meatball surgery and it got to him. Plus, it wasn’t like Borelli was falling down drunk. He was just unfit to operate. He was able to talk Hawkeye and Trapper through the surgery without a problem.

It would be one thing if Hawkeye had only reacted angrily upon finding Borelli in the Swamp unfit to operate. That would have been more realistic. Nobody else seemed bothered by Borelli’s drinking. Radar knew. Trapper must have known. Everyone in the O.R. must have known something was going on or else Borelli would have been operating himself. But no. Holier-than-thou Hawkeye had to hold a grudge. At least he eventually came around and tipped his hat to Borelli at the chopper pad.

I really don’t like the scene in which Hawkeye and Trapper talk to the British commanding officer. Everything about it feels off, from the accent to the hair color of Major Taylor to the joke about the driving on the left side of the road. Joseph Maher, who played Major Taylor, was Irish and that could explain why the accent sounds so stereotypical.

Frank and Margaret had almost nothing to do in this episode, relegated entirely to their usual whining and sucking up. When Dr. Borelli was describing how to save Frank’s patient’s leg, notice how everyone seems excited about the surgery except Frank, who is concerned only with someone getting into trouble. Exactly what proof did Frank have, I wonder, that Hawkeye and Trapper didn’t attend a single lecture in Japan? Did he have someone spying on them? 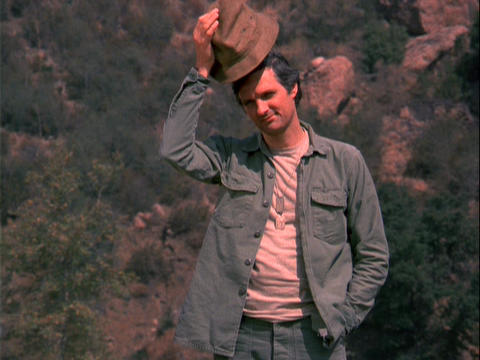 For anyone who doesn’t know, Dr. Borelli was played by Alan Alda’s father, Robert Alda. The character would return in Season Eight’s “Lend a Hand.”

Trapper telling Radar in the scrub room to find the nurse he had a date with only to discover that she’s standing right next to him is a nice moment.

When Radar takes Hawkeye, Trapper and Colonel Blake to the chopper, we get a nice look at parts of the camp rarely seen, including the road to the upper chopper pad.

Speaking of Radar, it seems totally out-of-character for him to drive off and leave Colonel Blake not once but twice. It would have fit better had he arrived before Colonel Blake called for him and later left the chopper pad — with Blake — before being told to head back to the compound.

9 Replies to “Episode Spotlight: The Consultant”